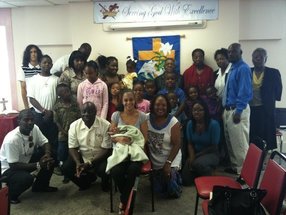 Love---We will love God, through demonstrated faith and obedience to His divine Word. We will love each other as His disciples, striving to build and strengthen our relationships, through worship, in our homes and in our community.

Share—We will share the gospel of Jesus Christ with all, to extend to them the gift of eternal life. We share in our resources to demonstrate the love of God, to the disenfranchised, through clothes and food closets. We will also promote unity in the body of Christ by connecting to local churches in the community to further promote Kingdom building.

Grow---We will strive daily to grow spiritually and in the knowledge of God’s word through prayer, service, education and training.

Send---We will seek opportunities to expand God’s influence in the world by encouraging all co-laborers of New Journey to support the work and mission of church planters and missionaries both domestically and internationally.

What are services like?
Contemporary worship style, dynamic evangelistic presentation of the word of God.

What is the community like?
Warm and inviting, relationship oriented.

What if I'm not a Christian?
All are welcome and encouraged to come as you are. 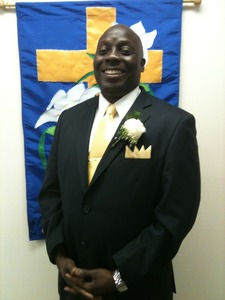 Pastor James C. Monroe was born in Lake Alfred, Florida on November 2, 1959. He is married to Maria Monroe and the father of Jasmine Monroe. He also assisted in the raising of his maternal nephew, Sinclair Mitchell. Pastor Monroe was called to the gospel ministry in Louisville, Kentucky in December 1990. He was ordained to preach the gospel at the Beargrass Missionary Baptist Church in Louisville, Kentucky in 1995. Pastor Monroe graduated from Oak Ridge High School of Orlando, Florida. He served his country in the United States Army for six and one-half years and received an Honorable Discharge. He received his Bachelor of Science degree from Orlando College, Orlando, Florida. Additionally, he attended the Southern Theological Seminary and Louisville Bible College, Louisville, Kentucky. Pastor Monroe was called to the Pastorate of Christ First Church of Central Florida on September 26, 1996. Prior to this call to pastorate, he was ordained as a deacon, served as Sunday School Director, Sunday School Teacher, and Trustee at King’s Way Baptist Church of Orlando, Florida. After relocating to Louisville, Kentucky with his family he became a member of Beargrass Missionary Baptist Church. At Beargrass he served as a Deacon, Sunday School Teacher, and Assistant Director of Sunday school, Director of Sunday School, and Director of Youth Drill Team. In 1990 Pastor Monroe accepted his call into the preaching ministry and began to serve as Associate Minister. Pastor Monroe also served as Interim Pastor at the request of another local church while residing in Louisville. In the spring of 2000 an inspired meeting occurred between Pastor Monroe and Bishop A.L. Helligar. In January 2001 their two respective churches became one under the name Koinonia Ministries of Central Florida. Pastor Monroe served as Co-Senior Pastor of Koinonia Ministries of Central Florida until September 2008. In September 2008, Pastor James C. Monroe was led by the Holy Spirit to found a new work in the Winter Garden area. Pastor Monroe founded New Journey Baptist Church in October 2008, in his home with 9 members. After six months of meeting in his home, Pastor Monroe led New Journey to their new worship site at 99 N. Main Street in Winter Garden; in addition he began ACTS II Bible Study in his home on Wednesday evenings. Through Pastor Monroe’s leadership the church has experienced a lot of first’s, to include mid-week bible study, community outreach, evangelism training, installation of church officers and soul winning campaigns. Pastor Monroe is tireless in his efforts to impact our community through evangelism outreach and meeting people’s needs. Through his and Sister Monroe’s participation in food basket distribution on behalf of the church, New Journey Baptist Church has been awarded for our ongoing and generous support of the Winter Garden Kid’s Café Feeding Program. It is his desire to lead New Journey to begin support of a missionary to Nigeria in the upcoming future to expand New Journey’s evangelism outreach globally and he has led New Journey in its attendance at Global Impact of First Baptist Church of Winter Garden for two years. Pastor Monroe is continuing his Christian education through his attendance and participation in Goal I and II through the Greater Orlando Baptist Association. Through the grace of God Pastor Monroe will continue the ‘journey’ and remain on the path that God has placed him to “Serve God with Excellence”.