See all 355 churches near Girard, IL 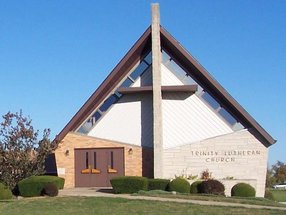 We here at Trinity Evangelical Lutheran Church are located between Girard and Virden, IL.

This congregation is established so that its members, individually and collectively, may carry out the mission which Christ has given us:
- Make disciples of all nations, beginning here;
- Proclaim the Gospel of Our Lord to our communities
- Minister to one another, building up the body of Christ, encouraging each
other to our individual gifts for His service.

We here at Trinity Evangelical Lutheran Church without reservation accept the scriptures of the OLD and the New Testament as the true Word of God, verbally inspired, and to only rule and norm of faith and of practice; and acknowlege and accepts all of the Confessional Writings of the Evangelical Lutheran Church, contained in the Book of Concord of 1580, to be the true and genuine exposition of the doctrines of the Bible. These confessional writings are the three Ecumencial creeds (The Apostolic, The Nicene, and the Athanasian), The Unaltered Augsburg Confession, The Apology of the Augsburg Confession, the Smalcal Articles, Luther's Large and Small Catechism, and the Formula of Concord.

This congregation is affiliated with the Southern Illinois District of the Lutheran Church Missouri Synod. 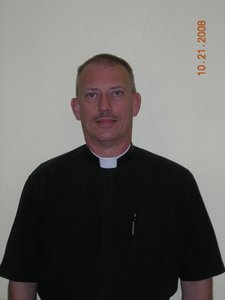 The Reverend Keith Edward GeRue was born on Februaru 19, 1965 in Beloit, Wisconsin. His parents Ronald and Beverly GeRue of Beloit Wisconsin, presented him for the washing and rebirth in Holy Baptism before the font at Saint John's Evangelical Lutheran Church on March 3, 1965. Pastor GeRue attended Saint John's Evangelical Lutheran School from Kindergarten through 8th grades. He professed the faith given to him in Holy Baptism before the altar of St. John's Evangelical Lutheran on May 13, 1979. Pastor GeRue attended Rockford Lutheran High School and graduated in 1983. He continued his education at Concordia College Wisconsin. He graduated in 1988 with a Bachelors degree in Education and Theological Studies. From the fall of 1988 through the spring of 1990 he studied at Concordia Seminary Saint Louis, MO. In 1990 Pastor GeRue served as director of comminications for the 150th anniversary of Concordia Seminary Saint Louis, MO. On June 23, 1990, Pastor married Valerie Fay Virchow of Newburg, Wisconsin. She has a teaching degree from Concordia University Wisconsin. In February 1991, Valerie and Keith moved to Fort Wayne, Indiana. There Keith pursued his theological studies at Concordia Theological Seminary. He vicared at Saint Paul Evangelical Lutheran Church in Niles Michigan in 1992-1993. He graduated from CTS in February 1994. Pastor GeRue was placed by the LCMS to pastor at Holy Cross Lutheran Church, Onida, Saint John's Lutheran Church, Agar, and Immanuel Lutheran Church, Harrold South Dakota. He served there until accepting the call in February 1998, to pastor at Our Savior Evangelical Lutheran Church, Momence, Illinois. August of 2006, Pastor GeRue was called to serve as associate pastor of Saint Paul Evangelical Lutheran, Hamel and Trinity Evangelical Lutheran, Worden. He also served as Headmaster for the 2006-2007 school year. In the fall of 2007 through the spring 2008, Pastor GeRue served the U.S. Army and the 384th MP Battalion as Chaplain deployed to Bucca, Iraq. Following deployment he served as Battalion Chaplain for the 347th AG replacement Battalion from Marion, Illinois. On September 15, 2009 Pastor GeRue was reassigned to the 206th Regional Support Group in Springfield, Illinois. Valerie is a Junior High Teacher at Concordia Lutheran School, in Springfield. Together Pastor and Valerie have adopted two daughters, Catherine (15) and Elizabeth (11). Catie attends Springfield Lutheran High School. Beth attends Concordia Lutheran School, in Springfield.
Keith GeRue on Facebook
Keith GeRue Blog
Keith GeRue Website
Services Directions Call Website
Suggest an Edit