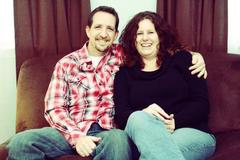 Family Life: Lauren is my wife and my best friend. We have been married for over 20 years and have three children. Victoria is a freshman in college this year, Esther is a junior in high school, and Isaac is in seventh grade. We enjoy hanging out, watching movies, playing in the creek, and playing board games together. Oh, and we love to eat anything Lauren makes (she bakes magical stuff and her salsa is incredible). My Story: Well, I guess that story starts when I went to college. I was a California boy, Lauren was a Kentucky girl, and we met at a small college in Dubuque, IA. I was a skeptical agnostic. She had been raised in a great home with parents who loved Jesus. I was a rude, loud skateboarder – and she wasn’t impressed. She was friendly, but we really didn’t like each other much that first year. At the same time, God was quietly working to undo me with his grace. My life was a mess and a good friend encouraged me to read the Bible. I did – and became a believer. After that, I found that Lauren and I suddenly had a lot in common, and, in fact, were kind of crazy about each other. We were married between my junior and senior year in college. We moved to St. Louis and I went to work as a teacher and later as a principal. After 17 years in education, I went to work for our church, The Journey, as the family pastor. After a couple years of that, I moved to Edwardsville to start a new site for the church called The Journey: Metro East, which, in 2011, became Trailhead Church. It’s been an incredible trip, and you can read more about that story here. Favorite Reads and Why?: I love pretty much everything by C.S. Lewis. He writes the kind of stuff that engages me and challenges me to think about and feel the complexity of life. Till We Have Faces, is my favorite Lewis novel. It is a powerful retelling of the ancient Greek Cupid and Psyche myth, examining the soul’s desperate desire to be united with infinite love. After that, I have a lot that I enjoy, so it’s hard to pick favorites. Other authors that I love would include: Flannery O’Connor, Kurt Vonnegut, Tim Keller, Larry McMurtry, Chuck Palahnuik, John Steinbeck, J.R.R. Tolkien, William Faulkner, and many others.