Known affectionately as "the little white church on the hill," St. Peter's is a small, friendly congregation. We are part of the Wartburg Parish, a cooperative effort among 5 Lutheran congregations to provide ministry to the communities of Steeleville, Chester, and the Trico area. 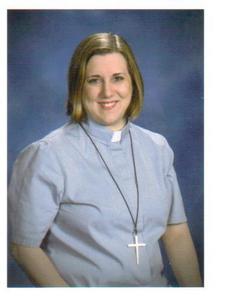 Pastor Laura began her faith journey in Champaign, Illinois, where she was baptized at Good Shepherd Lutheran Church. Her faith was nurtured as she grew up in the Lutheran Church, attending Sunday School and Youth Group and participating in mission trips and the National Youth Gathering in 2000 in St. Louis. She attended Augustana College in Rock Island, Illinois and received a Bachelor of Arts in Religion in 2005. At Augustana, her call to ordained ministry was affirmed by the Campus Ministries program, the faculty of the Religion department, and a summer internship at Grace Lutheran Church in Champaign, Illinois. She decided to attend seminary. She began studying at Lutheran School of Theology in the fall of 2006, and there she met her future husband Matt. She completed field education work at Redeemer Church, Park Ridge, Illinois in 2007-2008. Her internship was at Holy Trinity Lutheran Church, Falls Church, Virginia, under the supervision of Rev. Jane Halpern, during the 2008-2009 academic year. On January 16, 2010, she and Matt were married at Grace Lutheran Church in Champaign, Illinois. They graduated seminary together in May 2010 and were ordained together in January 2011. They were installed as Pastors of St. Luke on January 23, 2011. Pastor Laura accepted the call to serve in the Wartburg Parish in November 2012, and was installed on January 13, 2013. Pastor Laura lives in Campbell Hill with her husband, her daughter Anna, and their dog Allie.