the place of praise, Memphis, TN

At Shiloh Church of Memphis - The Place of Praise, we are
- Encountering God
- Experiencing Grace
- Engaging Community
- Embracing Unity

What are services like?
We welcome all persons to worship with us. You can expect a warm, friendly fellowship with relevant and prophetic Bible preaching and powerful music. Although our ministerial staff subscribes to liturgical vestments when observing the Sacraments of the church, the majority of our congregation dresses casually so we invite you to come as you are!!

What if I'm not a Christian?
If you are not a Christian, we invite you to experience worship with us, be inspired by the music and enlightened by relevant preaching. There is never any pressure to be join our ministry but, if you are moved by the Spirit to do so, we welcome you to be a part of this community of faith. 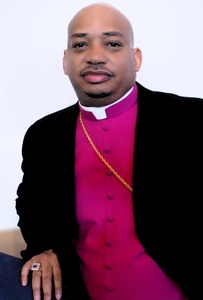 Bishop W. James Thomas, II serves as Senior Pastor of the Shiloh Church of Memphis, General Overseer and Senior Bishop of The Apostolic Covenant of Churches International, Inc. He has served as senior pastor since September, 1994 He holds a Bachelor of Science degree (cum laude) from Crichton College (now Victory University), Memphis, TN; a Master of Divinity degree (magna cum laude) from Memphis Theological Seminary; and is currently a candidate for the Doctor of Ministry degree at Memphis Theological Seminary. He has been awarded the honorary Doctor of Divinity degree from St. Thomas Christian College (October 2002) and American Bible University (April 2012). In January 2006, he completed the first Intensive of the Graduate School of Theological Studies at Harvard Divinity School in Cambridge, MA and in August 2006, completed the second intensive at Yale Divinity School in New Haven, CT. In June 2007, he released his first book, The 23rd Psalms: An Expository Teaching during the 14th Annual Full Gospel Baptist Church Fellowship International Conference in Atlanta, GA, where he was also the featured speaker for the International Conference. In March 2008, Bishop Thomas was invited to open the 103rd Congressional Session in prayer at the US Capitol in Washington, D.C. In May 2008, he participated in a theological immersion to Oxford, Cambridge, and London, England in a study of the life and writings of C.S. Lewis. In May 2010, he studied Celtic Spirituality in the Ireland cities of Belfast, Portrush, Galway and Derry. In July 1997, he was appointed District Overseer of the West Tennessee Full Gospel Baptist Church Fellowship by Presiding Bishop Paul S. Morton, Sr. and served faithfully in that position until January, 2008. He is the founder and CEO of the Grace Community Development Corporation and Grace for Living Ministries. On February 19, 2011, he was duly consecrated to the Sacred Office of Bishop by Bishops Micheal D. Tate, Michael B. Nesby, Helen S. Pradia and Charles Rogers. He is currently a member in good standing of the Joint College of African American Pentecostal Bishops, under the leadership of Metropolitan Bishop J. Delano Ellis, III. He is also a life member and former chapter officer of Kappa Alpha Psi Fraternity, Inc. He is married to Lady Antonia R. Thomas with one daughter, Joshlyn.