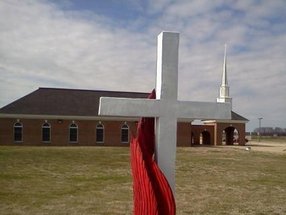 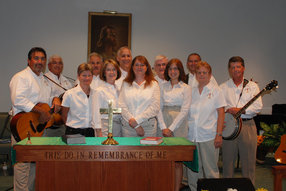 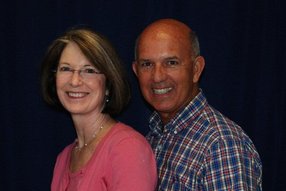 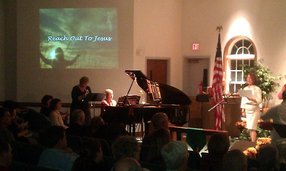 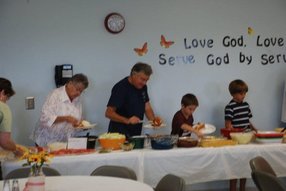 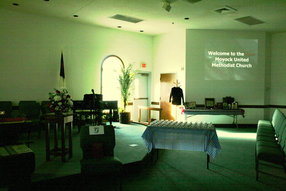 Welcome to the NEW Moyock UMC. We are so glad you decided to join us this Sunday. We’ve been expecting you! We truly hope that you will experience the Fresh Wind and Fresh Fire that has ignited this congregation. Our God is an awesome God and we are being obedient to Him. Ask a church member to tell you the rest of the story. We hope you will come back and join us in the weeks to follow. We are In ministry together and we need you to help us Serve in His name right here in our Community.” 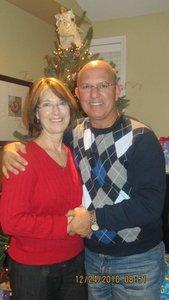 The Reverend Bill Masciangelo is a native of Pine Beach, NJ. He graduated from Admiral Farragut Academy; a Naval Academy Preparatory school, then spent four years at St. Francis University graduating with a teaching degree and a history concentration. At graduation Pastor Bill was commissioned a 2nd Lt. in the United States Marine Corps. Pastor Bill spent 20 years as a servant-leader with the Marine Corps retiring at the rank of Lt.Col. A combat veteran of Vietnam, he served in a variety of increasingly responsible leadership and staff positions during his military career. His last four years, in the Marine Corps, were spent as the Marine Corps Representative at the Naval Command College working with senior naval officers and their families from over forty countries. Pastor Bill also was able to earn a Masters degree in Education while still on active duty. After his retirement from the Marine Corps, Pastor Bill then entered his second career; Hospitality. Here he honed his service and hospitality skills with such companies as Sheraton Hotels, Holiday Inn Hotels and most recently Wyndham Hotels and Resorts. Pastor Bill served in a variety of operational, sales and marketing positions, with these major hotel companies. Pastor Bill is the author of the “Military Reunion Handbook: A Guide for Reunion Planners.” One of his favorite memories, while working closely with veterans, was his two week experience escorting WWII veterans back to Normandy for the 50th Anniversary of the D-Day invasion. These were truly sacred and inspirational moments. It was while living in Poplar Branch, NC, working as President of Blackwater Training Center and attending Sharon UMC that Pastor Bill began to realize that he was being called to full-time ministry serving the Lord. This calling had actually started many years before, but like many in the Bible, he said, “Lord, you don’t mean me? Do You?” Pastor Bill served in a variety of laity positions at Sharon UMC including Lay Leader and Lay Speaker. He also Walked To Emmaus where the Holy Spirit really began to work in his life. While at Sharon UMC, Bill led the congregation through the Forty Days of Purpose program, facilitated Disciple 1 and completed Disciple 4. He also taught adult Sunday school classes for the past 6 years. “Disciple 1 was a major turning point in my walk with the Lord. What a powerful Bible Study program!” During his 3 year tenure as lay leader, Bill assisted his pastor and church members in their efforts that have now shown double-digit growth at weekly worship and the creation and implementation of new ministries that are meeting the special needs of the local community. In November 2006, Pastor Bill answered the call to full time ministry. On June 26, 2007, Rev. Bill Masciangelo assumed the full-time position of Pastor at New Hope United Methodist Church. Pastor Bill is dedicated to Radical Hospitality, Passionate Worship, Intentional Faith Development, Risk Taking Mission and Service and Extravagant Generosity. These are the cornerstone practices that lead to healthy, vital and fruitful churches. He retired for medical reasons from full time ministry in September of 2010. He has during his recovery, hosted a men’s Bible Study from his home, sang in the choir and taught Sunday School as needed. After being healed from his disease at a prayer meeting, Pastor Bill was appointed to Moyock UMC in August of 2011. Pastor Bill’s interests include swimming, trail riding on his horse Silver, playing his trombone again,biking, kayaking and recreational boating. He enjoys all these interests with his wife Susan, who is at his side on all these activities. Pastor Bill and his wife Susan have four adult children: Maryellen, Lisa, Karen and Michael and six grandchildren; Tori, Tyler, Luke, Morgan, Lennah and Corbin. Lisa is married to Steve Parulis and Karen is married to Major Kelly Johnson, USMC. Michael is married to Amberlee. Maryellen resides in the Charlotte, NC area. Pastor Bill is humbled and honored by this appointment. He is passionately dedicated to being in full service to the Lord while serving at The NEW Moyock UMC. Join Pastor Bill and his wife Susan and the congregation. We are on a journey together to be disciples.