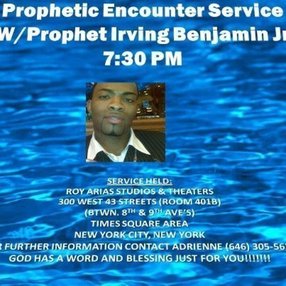 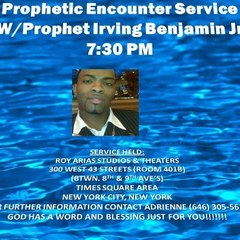 Biography Of Prophet Irving Benjamin Jr. Prophet Irving Benjamin Jr. was born February 14, 1973 to the late Irving Benjamin Sr. and Vivian Ann Samuels in Brooklyn, New York. He attended the New York City Public School System. In 1988, Prophet Benjamin was accepted and attended Murry Bergtraum High School for Business Careers in New York City. The same year, he and his family joined Wayside Baptist church in Brooklyn, New York under the Pastorship of the late Rev. Joe L. Parker. During Prophet Benjamin’s tenure at Wayside Baptist Church, He recognized the call of God on his life through the preaching and teachings of the late Rev. Joe L. Parker and also during this time he joined the Junior Usher Board and became the President for a term. He was also the President Of the Youth Ministry for ages (17-19) and on fifth Sunday, which was Youth Sunday from time to time he would preside over the Youth day Service. Prophet Benjamin was faithful to Wayside Baptist church. In 1992, Prophet Benjamin graduated from Murry Bergtraum High School for Business Careers with a High School Diploma in Accounting. A Few months later Prophet Benjamin was accepted and attended Shaw University located in Raleigh, North Carolina. During Prophet’s Benjamin matriculation at Shaw, God used him to be a light, inspiration and encouragement to the administration, faculty, staff and student body. He was also respected on Shaw University Campus and community. While Prophet Benjamin was at Shaw he joined the Mount Calvary Word Of Faith Church, under the Pastorship of the Legendary Gospel Singer Shirley Caesar in Raleigh, North Carolina in 1995. It was under this ministry that Prophet Benjamin was introduced to the Gospel Ministry and even through the unadulterated word that was being preached and taught through this great vessel. God was molding and shaping Prophet Benjamin for Greatness. On Friday, November 15, 1996 he went forth to proclaim the gospel in his trial message. Pastor Caesar, appointed Prophet Benjamin over the Youth Ministry and through his faithfulness God begin to bless and manifest the Friday Night Youth Services. In 1997, Prophet Benjamin graduated from Shaw University with a BA in Sociology. In the year 2000, the Lord began to shift in the life and spirit of Prophet Benjamin and the birthing and manifestation of the prophetic mantle was coming to pass. God was moving him further in his destiny and true calling as a prophetic voice in this end time, so Prophet Benjamin joined (Resurrection Tabernacle of Praise Full Gospel Church) later known as Greater Life Tabernacle of Praise Full Gospel Church under the Pastorship of Apostle Mary Baxter. By Prophet Benjamin obeying God the manifestation of the Prophetic begin to really flourish in his life like never before. As Prophet Benjamin connected his self to this great and anointed woman Of God, he recognized his identity as a Prophet Of God and Prophetic Psalmist. He remained faithful and God blessed him with his own ministry (Apple of Thine Eye Outreach Ministries) known as Empowered 2 Excel Ministries in 2000. Empowered 2 Excel Ministries, Inc in Brooklyn, New York (A Youth and Young Adults Ministry to excel in every aspect of their lives), Men Inspired and Motivated For Excellence Ministries (a ministry for men, young and old to encourage and motivate into becoming dominant in the spiritual and natural world), Bowels Of Compassion Mission Outreach Ministries (The goal of this ministry is to help people that are in need) and Pristine Image Enterprises, Inc (Which is his company for Christians and Non-Christians talent and gifted agency for those that need to be motivated and inspired to pursue their aspirations, dreams and visions). Prophet Benjamin is determined to follow Christ and do His will whole-heartedly. Hear ye him for his Grace and Ability. For Bookings call: (347 )607-1165 Angela V. Frink (Press Relations/ Church) or you may write directly to Pastor/Prophet Irving Benjamin Jr. 110 Monument Walk apt 6d Brooklyn, NY 11205-1720 (718) 806-7766 or email [email protected]