See all 3,197 churches near Doylestown, PA 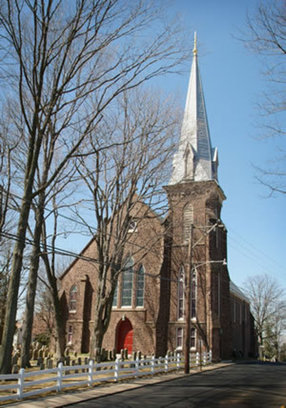 The Presbyterian Congregation of Doylestown started when the Reverend Uriah DuBois came to Doylestown to found Union Academy in 1804, at what is now the corner of East Court and Broad Streets. The Academy served as a private school from its inception until August 1849, when it became part of the public school system. The building was razed in 1889 to make way for the Doylestown Borough School which was destroyed by fire in 1973.

steepleThe founding of the Union Academy in 1804 provided an opportunity for the first religious services in the community. The Reverend Uriah DuBois, pastor of the Deep Run Presbyterian Church in Bedminster Township several miles north of Doylestown, was the first principal of Union Academy, and one room in the Academy was set aside for use by all Christian denominations.

The Reverend DuBois divided his pastoral duties between Deep Run and Doylestown. In 1813, the year after Doylestown was made the county seat, the Presbyterians built their first church building on a lot purchased from John Shaw for $400. The new building was dedicated on August 13, 1815. It was constructed of stone, cost about $4200 to build, and stood on the site of the present church building. In 1871, the old church building was torn down and a new edifice was constructed facing East Court Street. The first building had faced Church Street. The new church edifice was dedicated on May 16, 1872. The Reverend DuBois continued to serve as pastor at Deep Run and Doylestown, as well as principal of the Union Academy, until his death in 1821. The congregation was served by supplies, interims, and short pastorates until the Reverend Silas Milton Andrews, D.D., came to serve as minister in 1831. Dr. Andrews' pastorate continued for fifty years. When he came in 1831, there were only 95 members in the two churches at Deep Run and Doylestown. By 1877, membership had grown to 400.

In 1913, the Deep Run and Doylestown congregations were officially merged to become the Deep Run-Doylestown Presbyterian Church. In 1957, a new church was established on the original site at Deep Run and both churches then resumed separate and respective histories.

In 1940, an educational building was constructed behind the church edifice on Mechanics Street. The building was enlarged in 1965 and renamed Andrews Hall in honor of Dr. Silas Andrews who served for fifty years as minister (1831-1881).