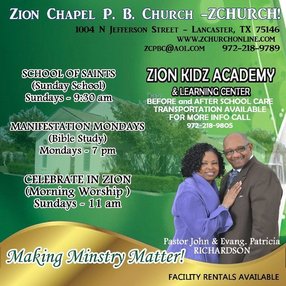 We believe that in this season if ministry God is providing and allowing us to gain and conquer New Land and New Levels with No Limits ... and we are enjoying the journey!

We Exist to See people Saved, Set Free, and Developed in their Faith.

Our Focus is to reach Families with the message of Jesus Christ, to help Develop Families in their Faith, and Empower them to financial success and freedom.

What are services like?
Our services are always encouraged to be spirit led. We have order but the spirit has the flow!

What if I'm not a Christian?
You are welcome, and we pray that something is said or done that would urge you to get to know the God that we serve!

Elder Richardson is a Resident of Dallas, Texas, raised in the home of Mr. & Mrs. Richardson. He spent his formative years at the St. John Primitive Baptist Church in Dallas, Texas, where he served as a son in the ministry under the leadership of F.L. Livingston of the Primitive Baptist Association. Elder Richardson is the husband of one wife, Mrs. Patricia Ann Richardson, the Father of Three: Xavier (Dee) Richardson, Tiffiny Echols (Jeffrey) & Timothy Richardson; He also reared his nephew: Jerrell Blaylock; grandfather of ten: Zakir, Zane, Niriyah, Cierra, Anju, Ayin, Gerrick, Tristan, Jacoby and Jakwaylon. He attended South Oak Cliff High School, followed by Bishop College, and received his Degree in Microcomputer Technology. He also attended and received his Diploma in Theology from the Southern Institute of Dallas. He was ordained to preach in 1975 and pastored since 1980. His 1st Pastorate was in Palestine, Texas for 6 years, and his 2nd and memorable tenure with the Zion Chapel Primitive Baptist Church for the last 14 years, since 1991. He continues to serve as Senior Pastor of Zion as well as in many areas of ministerial leadership. He was the Moderator of the Sinai District Association for over 11 years of dedicated service to the Primitive Baptist Congress. After his tenure, he was inducted into the Hall of Fame on July 8, 2005 as a monarch to the associate body. God has continued to use Elder Richardson as a visionary founding the Zion Chapel Economic Development Incorporation in 1999. This 501c3 Non-Profit was founded to assist in the community’s progress of South Dallas. With the help of many and the structure of this organization, we have had some successful development. The Zion Chapel P.B. Church is excited to call Elder Richardson, Pastor, for the many accomplishments and victories we have won.