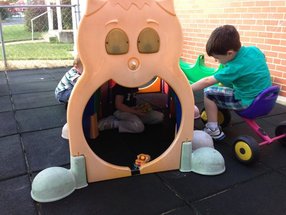 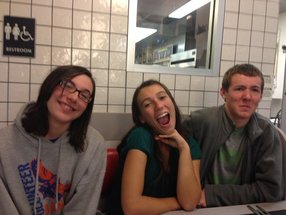 Waverly Road Presbyterian Church is dedicated to helping people experience God and to sharing the good news of Jesus Christ in our community and throughout the world! We are a church family committed to Christ-centered worship, learning and loving.

What are services like?
Services are relaxed and friendly in a traditional context. Though the content is current and the creativity of our members often utilized, the services will feel like coming home again.

What is the community like?
Family-oriented. We see each other as part of our extended family, members babysit for other members, we eat dinner together, hang out and play video games with each other. We are family.

What if I'm not a Christian?
That's ok. We accept all people for where they are in their faith. You'll find some in our community who are "convicted" of their faith, while there are many others who are still seeking where they fit in the world of faith.

Dan came to Waverly Road Presbyterian Church in 2002. Before that time, he had pastored churches in several areas of the country, including Missouri, Kentucky, Virginia and Indiana. He has been in ministry since 1977. Dan grew up in Sussex, NJ and attended college at Texas Christian University where he met his wife, Jean. After finishing his undergraduate degree, Dan went directly into the Austin Presbyterian Theological Seminary where he received a Master of Divinity degree in 1977. In 1990 he received his Doctorate of Ministry from Louisville Presbyterian Theological Seminary. The title of his major project was "An Evaluation of the Hermeneutic and Style of Frederick Buechner." Dan and Jean have three adult children, Amy, Kristy and Adam; two grandsons, Hank and Buck; and a granddaughter, Payton. Since the children live in different parts of the country, Dan and Jean travel often. They also have two four-legged family members, an Australian Shepherd/Brittany Spaniel mix named Mandy and an English Springer Spaniel named Eli. Dan is an avid sports fan and also enjoys traveling. He has been to several Central and South American countries (Nicaragua, Guatemala, El Salvador, Bolivia, and Columbia), Cuba, and Malawi in South Africa. While traveling, Dan has preached at the Mulanje Mission Church in Malawi, Africa and at the First Presbyterian Church in Havana, Cuba. In recent years, four of Dan's sermons have been published in Lectionary Homiletics. His favorite books are The Sacred Journey and The Final Beast by Frederick Buechner, The Power and the Glory by Graham Greene, Freedom Road by Howard Fast, A Million Miles by Donald Miller and Brother to a Dragonfly by Will Campbell. If there is one verse in the Bible that Dan would choose to describe the mission of the followers of Jesus it is Luke 9:2, "Jesus sent them out to preach the kingdom of God and to heal." Elizabeth Troyer, Associate Pastor Rev. Elizabeth Troyer is a native of West Virginia. Elizabeth graduated from Davis and Elkins College in Elkins, WV, with a BA in Music and from Pittsburgh Theological Seminary in 2008. In her spare time she likes to read, play sports, and play in the Johnson City Community Band. She has one rambunctious puppy Bernice, a furry Persian cat named Hermione, and a devoted, often distraught, Cleveland fan husband named Jeremy. Elizabeth has a passion for ministry with youth and young adults. She is especially interested in helping individuals reach their full potential in Christ and so encourages youth to work alongside adults and take leadership positions in the church. Elizabeth also enjoys using all manners of art in worship and Christian Education as way to expand our understanding of God beyond the written and spoken word.