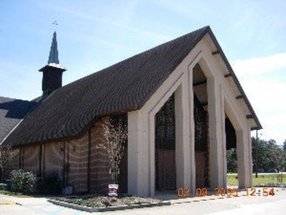 Our Core Values Include:

Word and Sacrament Ministry…proclaiming a message of hope and eternal salvation through grace alone, faith alone, and scripture alone.
Christian Education…Biblical values are taught and reinforced by our members, families, teachers, and pastors.
Relational…welcoming, forgiving, caring, and fostering loving relationships.
Service…empowering and equipping people to make a difference in the world.

What are services like?
8:00 am Worship Service At our 8:00 service we celebrate the great tradition of liturgical worship with Holy Communion each week. We print the entire order of worship in the “worship folder”, and the hymns can be found in the Lutheran Service Book in the pew. If you become confused, ask someone next to you for assistance. They will be happy to help! 10:30 am Worship Service This service is more casual in nature and features a blend of contemporary music and traditional hymns of praise. This entire order of service is also in a “worship folder”. Every 5th Sunday is a contemporary service which features innovative multi-media, our praise band, and the same Christ-centered message from our Pastor or Vicar. Monday Night and Mid-Week Opportunities If you miss church on Sunday, please join us for Monday Night Praise at 6:30 pm. This service features contemporary music, praise band and a message from the Pastor or Vicar. Throughout the week, you’ll find men’s and women’s Bible studies, choir rehearsals, Boy and Girl Scout meetings and other activities taking place at Trinity. Check out the calendar so you don’t miss out! Find out more about mid-week opportunities at Trinity!

David (Dave) Buss was born April 6, 1961 in Ogallala, Nebraska the sixth of seven children to Norbert and Mary Buss. He was baptized May 21, 1961, at Trinity Lutheran Church, Ogallala, Nebraska. He attended public school in Grant, Nebraska and was a 1979 graduate of Perkins County High School. Dave served in the U.S. Army for three years following High School and was stationed in The Republic of Panama and Fort Carson Colorado. Upon separation from the military, Dave attended the University of Nebraska and managed restaurants for “Valentino’s Ristorantes” of Nebraska. He completed his undergraduate studies in hotel administration at Cornell University in Ithaca, New York in December of 1989. Dave was employed with Hyatt Hotels for ten years prior to entering Concordia Seminary Saint Louis to pursue a new career in the Pastoral Ministry. With Hyatt he has lived in Lake Tahoe, Nevada, Vail Valley, Colorado, Kauai, Hawaii, and Westlake Village, California. Dave served his vicarage here at Trinity Lutheran Church in 2002, joined the Ministry team as Associate Pastor in 2004, and became Head Pastor in August of 2011. Dave has been happily married to Lynette (nee Bauer), of Ogallala, Nebraska for almost 27 years. Lynette is a registered nurse specializing in cardiac care. They have three children: Elizabeth, born in New York, Joe, born in Nevada, and Jacob, born in Hawaii.