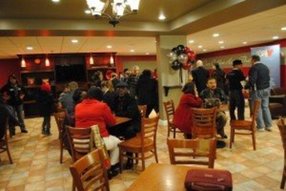 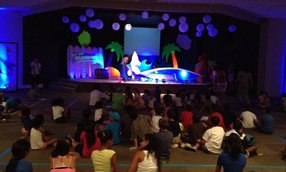 What do you think of when you hear the word “church”? Stuffy, out-of-date, judgmental, irrelevant? Well, when you come to Transformation Church you will rediscover a whole new definition of Church! We are a church for regular people like you—people looking for answers and a purpose in life. When you visit us, you’ll notice something is different about Transformation Church. People come as they are, whether they’re comfortable in jeans or slacks. No one needs a spiritual resume to experience God within our community. People of all backgrounds, different cultures, ethnicity and walks of life have made Transformation Church their home. You’ll find casual dress, great music, relevant biblical teaching that will help you connect with God, and you just might meet a few new friends. Experience a new attitude toward “church”!

What are services like?
GREAT COFFEE Our Sunday mornings begin at 9:30am in our brand new Cafe’. We serve FREE coffee and pastries that you can bring into the main auditorium for your enjoyment. Our Cafe’ is open throughout each service and is a great place for you to connect with others over a great cup of coffee! LIVE BAND The worship experience kicks off with a live band at 10:00am & 11:30am. The music is modern and full of life and energy. Words to the songs are projected on two 12′ wide widescreens. INSPIRING AND PRACTICAL MESSAGE Our Pastor will give the sermon, usually around 30 min. Pastor Joe presents the Bible in a way that is relevant to today’s culture using Bible Scripture, personal experience, humor and multimedia usually in a series that lasts around 4 weeks. He focuses on Christ’s teaching; how it can be a part of our everyday life, including how each of us can have our own personal relationship with Christ. OPPORTUNITY TO GIVE At some point in the service, everyone is given an opportunity to give. An offering bucket will be passed around. However, if you are a first time guest, we do not expect you to give! We want to give to you. Every first time guest will receive a free gift bag with some great items inside, that we are sure you will enjoy. MONTHLY COMMUNION On the first Sunday of every month, we serve communion. Everyone will receive a communion cup with grape juice and a wafer. We will all eat together based on the teachings of Jesus found in 1 Corinthians 12. EXCITING KIDS PROGRAMS Our Sunday Morning kids programs are available for all children up to 4th grade and runs simultaneously to our adult worship service. We have a Nursery, Preschool classes, and full Elementary Kids Service during the entire adult service.

What is the community like?
A VARIETY OF PEOPLE Sundays at TC are made up of skeptics, new believers, and those who are already on the journey with Jesus. Every week we have people visiting Transformation Church for the first time. It doesn’t matter if you have never read the Bible or have never gone to church, our goal is for you to feel welcomed and accepted (with no strings attached)! At no point will we attempt to single out our guests or make them feel uncomfortable, but we do encourage everyone to fill out a Connection Card letting us know about their visit. Then we’ll ask you to drop it off at Information Table before you go; to show our appreciation to 1st time time guests we give a free gift to all those who turn in a Connection Card. If you have any questions during your visit please stop by Information Table (the big table in the foyer with a sign that says, “Information”) or ask a Host Team Member (they will be wearing a TC Name Tag).

What if I'm not a Christian?
Sundays at TC are made up of skeptics, new believers, and those who are already on the journey with Jesus. Every week we have people visiting Transformation Church for the first time. It doesn’t matter if you have never read the Bible or have never gone to church, our goal is for you to feel welcomed and accepted (with no strings attached)! 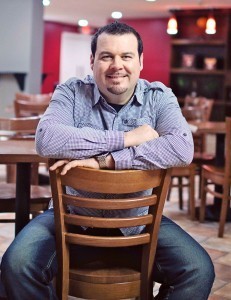 Pastor Joe became the Lead Pastor of Transformation Church on May 3, 2009. Together with his wife Ruth, they bring passion, vision, and leadership to our church and community. Pastor Joe and Ruth were married in June 1997, and have three boys, Joey (11), Josiah (5), and Seth who went to be with Jesus on April 10, 2004. Prior to entering Bible College, Pastor Joe had dreams and aspirations of being a New York State Trooper. Pastor Joe earned an Associates Degree in Police Science from Orange County Community College,Middletown, NY, and attended John Jay College of Criminal Justice in New York City. After a radical encounter with Jesus at Times Square Church in New York City, God changed the course of Pastor Joe’s life and he answered the call to ministry. In 1993, he enrolled into Zion Bible College in Barrington, RI. Pastor Joe graduated in 1997 from Zion Bible College with a Bachelors Degree in Bible,majoring in Pastoral Studies and minoring in Christian Education. He was ordained by the Assemblies of God in 2001.   Pastor Joe and Ruth together began ministry as Youth Pastors at Providence Assembly of God in Providence, RI. After serving in Providence, they left to Boston to plant a church that they called International Worship Center in Roslindale, MA. After several years in Boston, God called Pastor Joe and Ruth to Western Massachusetts to pastor a church there in 2003. Under Pastor Joe’s leadership, the church experienced remarkable growth and financial blessing. Many outreach ministries were birthed, including the Berkshire Dream Center. Then in 2009 God opened the doors for Pastor Joe and Ruth to come back home to Middletown, Orange County, NY. Pastor Joe was born and raised in the Bronx, NY, and grew up attending Second Spanish Baptist Church located at E102nd street in Manhattan (El Barrio). In 1985 he and his family moved to the Middletown area and attended Trinity Church until going to Bible College in 1993. He graduated from Pine Bush High School in 1989 where he played 4 years of football. He loves the New York Yankees and the New York Giants. He enjoys reading, working out, NASCAR, Starbucks and watching a good clean movie with his family. Since arriving in 2009, Transformation Church has tripled in size, 150 people have been baptized, and each week people are making decisions to follow Christ. He says, “Ruth and I are honored and humbled to be a part of this exciting time of growth and blessing at TC. We believe we are exactly where God wants us to be and that the best is yet to come!” A third service is planned to begin in 2013.