Welcome! There is something for everyone at St. Paul Ev. Lutheran Church and worship for all. There are numerous opportunities for the study of God's word for all ages. Our Sunday School involves students in hands-on participation in the Biblical stories. We also provide cross–generational interaction in faith development linking home and congregation together.

We are a congregation of the Evangelical Lutheran Church of America (ELCA), as well as a partner in the Grosse Pointe Ecumenical Parish. We gather around the Word and Sacrament. We unite with our brothers and sisters in Christ to proclaim the saving and redeeming message of Jesus Christ in word and in deed.

We are people of God desiring to move ahead in grace and hope. It is our prayer for you that you will discover your gifts and share those gifts with our congregation, the community and the world.

Yours in Christ, Pastor Frederick Harms and Pastor Morsal Collier

What are services like?
As a first-time visitor in any church, you may feel a little overwhelmed. Our goal at St. Paul is to make you feel comfortable and welcome every time you enter our doors. Our congregation ranges from babies to grandparents and everything in between. All are welcome here! To get your started we've described the layout of our chruch and all we have to offer. Finding Your Way around St. Paul Our parking lot is located behind the church with entrances off of Lothrop Rd. The main entrance is located at the rear of church building next to the parking lot. An elevator is available for access to all floors. If you go up the stairs to the first floor, you can access meeting rooms, the church office and the sanctuary. One more flight up the stairs takes you to 5-12th grade classrooms. Down the stairs takes you to the basement where we have additional classrooms, a nursery, a kitchen and large meeting rooms. On the first floor, the first room your will pass on your right is the Bethany Room. Adult Sunday school classes meet in this room each week with additional meetings held here as well. To your left, you will notice a cloak room to hang your coat. Bathrooms are also located on the left. The pastors' offices are directly across from the Fireside Room. Please join us in the Fireside Room for refreshments after the service. The church office is on the left just past the stair case. Feel free to stop by the office if you have any questions. The sanctuary is straight ahead. Generally on Sunday mornings you will be welcomed by our greeters and given a bulletin (order of service) by our ushers. Please take a seat where you are comfortable. You will notice a small pad in the pew. Please sign in. It's our way of getting to know who are visitors are. The bulletin will give you the order of the service with the appropriate page numbers. There are hymnals and Bibles located in each pew. Worship and Sunday School We serve communion each Sunday at alternating services. You are more than welcome to join us for the Meal. Please fill out a communion card, located on the back of each pew. You may give the card to the ushers when they indicate your time for communion. At the end of the service, please join us in the Fireside room for coffee and goodies. There are a variety of educational opportunities offered between the services. All ages are welcome to join us for Sunday School. Generally the younger students meet downstairs in the basement for a short opening before breaking into classes. The opening area is located at the bottom of the stairs off of the parking lot. 6th to 12th graders classes are on the 2nd floor. High school students are in the large youth room. 5th-8th graders meet in the classrooms across from the youth room. St. Paul provides a bright and cheerful nursery that is staffed on Sundays from 9 AM to 12:30 PM during the school year and from 10 AM to 11:30 AM during the summer. Those children three and under are encouraged to stay and attend for our LAMBS Sunday school class with their parents. LAMBS is held from 10:10 AM to 11:10 AM on the first Sunday of the month. The nursery is located in the basement across from Sandrock Hall. We want you to be comfortable at St. Paul. Dress varies from casual to formal.

What is the community like?
Grosse Pointe is a suburb of Detroit.

What if I'm not a Christian?
You are more than welcome! 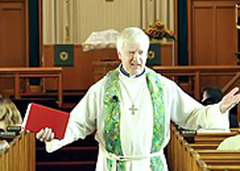 Pastor Fred Harms, who presently serves as Senior Pastor of St. Paul Lutheran Church, was ordained in 1973. He received his undergraduate B. A. degree in English and Speech from Luther College, Decorah, Iowa in 1969. His Master of Divinity degree from Luther Theological Seminary, St. Paul, Minnesota was completed in 1973. The first parishes served by Pastor Harms were Christ Lutheran and Luther Memorial Lutheran Church in Syracuse, Nebraska (1973-1975); and, First English Lutheran Church in Kimball, Nebraska (1975-1981). While serving as a Pastor in Nebraska, Pastor Harms organized the community-wide CROP Hunger Walk, initiated a Hospice Program for the Panhandle of Nebraska, and presided as Clergy Dean for the Northern Colorado Conference of the American Lutheran Church. In February of 1981, Pastor Harms became the Associate Pastor of Zion Lutheran Church in Ann Arbor, Michigan, where he served until the end of 1991. During his ministry in Ann Arbor, Pastor Harms received his M.S.W. degree from the University of Michigan, served on the Board of Recycle Ann Arbor, and was a member of the Board of Directors for the Ecology Center of Ann Arbor. He was involved in the initial plans for city-wide recycling efforts that have now come to fruition. Pastor Harms received the Call to serve as Senior Pastor of St. Paul Lutheran Church, Grosse Pointe Farms and began his ministry here in January of 1992. He has served during the time of the acquisition of a 56 rank pipe organ, the remodeling of the entrance and installation of an elevator, and the construction of a columbarium. He has served on the Synod Council of the Southeast Michigan Synod and as Vice President of the Lay Theological Academy of Grosse Pointe. He presently serves as Clergy Dean of the Metro-East Cluster of the Southeast Michigan Synod and the Chair of the Evangelical Lutheran Church of Jordan and the Holy Lands Task Force for the Southeast Michigan Synod of the ELCA. He and his wife, Margaret. have three children: Erik (wife: Nicole) Harms, Kari (husband: Jared) MacDonald, and Martin Harms and three grandsons.