One Holy, Catholic and Apostolic Church Fort Worth, TX 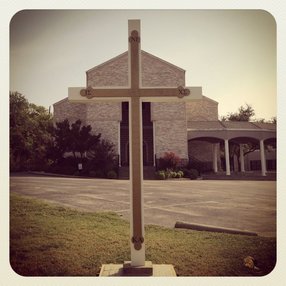 Welcome to St. Demetrios Greek Orthodox Church, in Fort Worth, Texas. We are delighted to have you visit our site and learn more about the Greek Orthodox Christian Church. Please join us for Sunday Worship. We are a Christ centered liturgical church and the children are as much a part of the worship experience as are the adults, participating in every aspect of the Divine Liturgy. Sunday Church School begins after the dismissal of the Divine Liturgy.

The Greek Orthodox Church is the One Holy, Catholic, Apostolic Church that was founded on the Feast of Pentecost in approximately 33 AD, when Jesus Christ sent down the Holy Spirit upon His disciples (Acts 2:1-31), preserving the faith which was once for all delivered to the saints (Jude 3).

St. Demetrios Greek Orthodox Church is part of the Greek Orthodox Archdiocese of America, the Holy Metropolis of Denver, under the spiritual guidance of His Eminence Metropolitan Isaiah of Denver.

Through the prayers of the Holy Fathers and of all the saints, Lord Jesus Christ our God, have mercy on us and save us!

What are services like?
Family friendly traditional Orthodox Christian Divine Liturgy. Services are celebrated in English and Liturgical Greek. The Divine Liturgy is a Eucharistic Service (Holy Communion). You will hear Psalms and Hymns, the Epistle and Gospel Readings, the Nicene Creed, and Lord's Prayer.

What is the community like?
We are a small mixed community of Greek Americans and Americans; young families, multigenerational families and single folks too. You don't have to be Greek to worship with us. Everyone is welcome.

What if I'm not a Christian?
Jesus Christ was born, lived, died and rose on the third day to save the whole world from sin and death. Everyone is welcome to worship with us ad come to the knowledge of Jesus Christ. Holy Sacraments are however reserved for those who have been Baptized and Chrismated in the Orthodox Church. 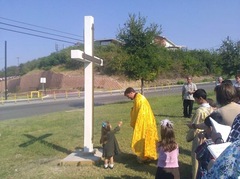 Father Nicholas is the son of Karen and the late Apostolos Paul Hadzellis. He was born in Long Island, New York. When he was 16 years old, his family relocated to New Mexico. He received his Bachelor of Criminal Justice and Bachelor of Arts in Sociology degrees from New Mexico State University, Las Cruces, NM (1999). After receiving his undergraduate degrees, he moved to Oklahoma and completed a Juris Doctor degree from Oklahoma City University School of Law, Oklahoma City, OK (2002). While attending law school, he was introduce to the Orthodox faith, and was received into the faith through Holy Chrismation in the spring of 2000 at the St. George Greek Orthodox Church in Oklahoma City, OK. Father Nicholas was admitted to the Oklahoma State Bar Association in the fall of 2002, and opened a general law practice in Oklahoma City. After two years of practicing family and criminal law, he and his wife decided to pursue his calling to serve in the Orthodox Church. They moved to Brookline, MA where he graduated with a Master of Divinity from Holy Cross Greek Orthodox School of Theology in Brookline, MA (2007). On October 21, 2006, he was ordained to the Holy Diaconate at the Holy Cross Chapel, Holy Cross Greek Orthodox School of Theology in Brookline, MA. On May 6, 2007, Father Nicholas was ordained to the Holy Priesthood at St. George Greek Orthodox Church in Oklahoma City, OK. In both instances, His Eminence Metropolitan Isaiah of Denver was the ordaining bishop. Father Nicholas was first assigned in 2007 to Annunciation Greek Orthodox Cathedral, in Houston, TX where he served as an associate priest for nearly five years. He has also served as the Orthodox Christian Fellowship (OCF) South Regional Chaplain since 2010. Father Nicholas and his wife of nine years, Presvytera Shyla, have three children: Katherine Sophia, Pelagia Grace and Nicholas Gerasimos. We would love the opportunity to share our faith with you, for more information about the Orthodox Church or to speak with Fr. Nicholas please call us at 817-626-5578 or e-mail him at [email protected]

Nearby Churches View churches near Fort Worth, TX