See all 310 churches near Passaic, NJ 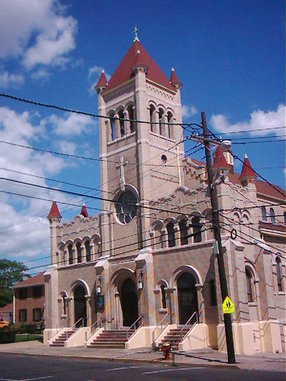 Our Lady of Mt. Carmel Church has been an integral part of the City of Passaic for the past century tending to the needs of the community in various capacities. They ministered to the Catholics in 3 counties from about 40 countries, ran a day-care center for 28 years started during WWII, sponsored many youth activities to children of all faiths including: the CYO for HS and Elementary, Basketball leagues and Scouting; collected food and prepared baskets for the needy while providing a faith-based and values-based education for thousands of children in the Passaic-Clifton area.

In 1905, the Italian Immigrants had their first Italian Chapel in Passaic in a small store on Park Place and State Street, then moved to the basement of St. Nicholas Church on Washington Place until 1912, when they bought an old firehouse at 10 McLean Street from the City of Passaic for $600.00. On July 10, 1922, The Italian Capuchin Fathers of the Stigmata of St. Francis Commissariat took over O.L. of Mt. Carmel Church. The Friars Minor observe the rule of St. Francis, wearing the habit and sandals and taking the vows of: poverty, chastity and obedience.

Groundbreaking ceremonies took place on May 6, 1923, and on August 4, 1923, the cornerstone was laid. In 1924 the present church was completed. During the same year the present St. Anthony of Padua Church was purchased by OLMC to be used as a Mission. On July 3, 1926, The Capuchin Sisters of the Infant Jesus (Franciscan Sisters of Ringwood) purchased the Convent of OLMC on 52 Park Place where it became the Motherhouse for the order, where they assisted the Capuchin Fathers in their parochial and missionary work for the Italian families. They had charge of Sunday School and the societies for children and women.

During WWII a need to assist working mothers developed and the Sisters started on September 3, 1944, a nursery school in the church basement. On May 12, 1949, a new building with modern facilities was blessed and remained until June 1972, at which time the building had to be demolished due to urban renewal with the widening of State Street. They also staffed the school that opened on September 8, 1954 and remains there today with one Sister as the Principal and other Sisters teaching in various capacities and also running the Sunday School program. On September 15, 1993, the school was cited in a Herald News Editorial as being ranked in the top 5% of schools nationwide in students’ test scores while only spending $1,850 per student compared to $10,561 statewide.

In 1996, when the parish built an addition to the school where then Bishop Frank J. Rodimer stated that it was one of the few inner-city parishes in the state that actually constructing an addition in contrast to the many parochial schools that were closing. And in 2003, the school recently earned the Middle States accreditation.

What is the community like?
Wonderful People from all races and nationalities, Passaic and Our Lady of Mt. Carmel Church are melting pots.

What if I'm not a Christian?
The RCIA program will help prepare someone who may want to become a Catholic.