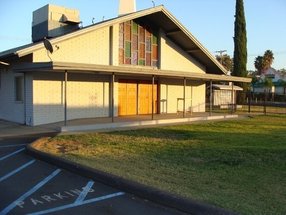 A Place to Belong!

Belonging. That is the way we are made. Not to be isolated and alone, but to be together - experiencing life with others. Belonging means having a place that is not the same when we are not there and better when we are. At Meridian we are endeavoring to build a community that has a place for you

Vibe
Down to Earth, Neighborhood-focused, Multigenerational

What are services like?
Worship and Music Ministry There are many opportunities to serve in this area. If you have a desire to share a musical ability (instrumental or vocal) ask about the worship band, the sanctuary choir or the worship team. If the technical side of things is more your area, then ask about our sound and multimedia ministry. These all combine to augment our worship experience.

What is the community like?
Does God really care how culturally diverse a church is? You bet He does. Jesus reached out to, spoke to, healed, and offered eternal life to people from many different ethnic groups in the thirty-three years that he lived on the earth. God’s Word, the Bible, illustrates that God is not passive about the cultural diversity of His Kingdom or His people - He is intentional about His Kingdom being culturally diverse. Not only did Jesus minister to people of different ethnic groups while on the earth, God’s Word, the Bible, says God is preparing a church from every tongue, every tribe, and every nation (Revelation 5:9). Every tongue, tribe, and nation means every language, ethnic group, and country. At Meridian Baptist Church, we, too, are intentional about creating a local body of believers that reflects the same cultural diversity that God wants for His Kingdom - and we are making great progress. At Meridian Baptist Church, we are blessed to have a number of languages spoken, people from various ethnic groups, and a number of countries represented. A number of different ethnic groups are represented too, including African Americans, Hawaiians, Vietnamese, Japanese, and a number of European American groups including Irish, German, English, and Scottish. The cultural diversity of the congregation is also represented in the leadership structure and the ministries that sustain the life of our church body. Our African American pastor leads a staff that includes Hawaiians, Europeans, and Vietnamese. At Meridian Baptist Church, we are realizing on earth that cultural diversity reality that God promises will characterize His Church in Heaven.

What if I'm not a Christian?
Maybe there are things in your life that don't seem to be going very well, and you've tried lots of solutions, but none seems to work. Everyone has questions about their own lives. If you haven't found answers that work for you, why not listen to what God has to say? God's Word has the answers that are grounded in truth and love. Jesus has answers to problems just like the ones you face every day

A native San Diegan, Pastor Rolland E. Slade is the husband of 30 years to the love of his life, the former Adrienne C. Jewell, and the proud father of Jay (26), Ryan (23), and Alexandra (17). Pastor Rolland accepted his call into the ministry in 1987 under the pastorate of Rev. Dr. Timothy J. Winters at Bayview Baptist Church, San Diego. It was there that he was baptized, licensed, and later ordained to preach the Gospel. While at Bayview, he served as an associate minister, Prayer Evangelism ministry coordinator, and as a senior high Sunday school teacher. In December 1991, Pastor Rolland was called to serve as Associate Pastor of the Highland Park Baptist Church, San Diego, under the pastorate of Rev. Andre Henderson. While at Highland Park, Pastor Rolland served as Minister of Missions and Church Planter for Meadowbrook Fellowship Church located in a large apartment complex near the church, as well as development coordinator for the church’s community retail ministry called Stamps and Things. In May 1995, Pastor Rolland and Adrienne were appointed by the Home Mission Board of the Southern Baptist Convention to serve as missionaries for the California Baptist Convention. Pastor Rolland was assigned as the Church and Community Ministries Director for the San Diego Southern Baptist Association under the leadership of Rev. B. Wade McKinley. After five years of service in this capacity, Pastor Rolland was appointed to serve as the National Missionary for Welfare to Work Evangelism Ministries for the North American Mission Board, SBC. There he was responsible for the initial development of the ministry evangelism strategy Man-to-Man (MtM). In November 2002, Pastor Rolland resigned from the North American Mission Board, and along with several colleagues founded the Faith Based Leadership Training Institute through San Diego State University. The Institute offers pastors and key lay leaders a two-year fellowship to learn and explore opportunities related to community renewal and development. Additionally, Pastor Rolland joined the staff of The Children’s Initiative as the Faith Community Coordinator in an effort to mobilize communities of faith in the area of advocacy for children. In January 2004, Pastor Rolland was installed as the Senior Pastor of the Meridian Baptist Church. Since that time, Meridian Baptist Church has experienced the revitalization of their membership as well as ministries. The church has become involved in several key community partnerships including the El Cajon Collaborative, Health Humans Services Multi-System Work Group, and is working to develop ministries that will help to strengthen families within the community. Pastor Rolland is a past fellow of the California Wellness Foundation’s Violence Prevention Program, as well as a past recipient of Children’s Hospital of San Diego and the San Diego County Office of Education’s Champion for Children award and the All Congregations Together (ACT) Visionary Leader Award. Pastor Rolland additionally served as the first Faith Community Mobilization Coordinator for the County of San Diego’s Health and Human Services Agency. Though Pastor Rolland is a frequent presenter on the role of the faith community in poverty work, community development, violence prevention, and community renewal at conferences throughout the nation, his greatest passion in ministry is leading to work of and for the Lord here at Meridian Baptist Church. < Back Pastor Rolland Slade Check out Pastor Rolland’s Blog! “Pastor’s Perspective” is a place where you can find at least a weekly update of life at Meridian Baptist Church from my perspective as Senior Pastor.