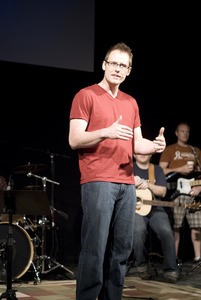 Aaron has been called to ministry for almost as long as he can remember. At six, he knew God had called him (although he had no idea what that meant), but it didn’t become official until he was 15 and actually started telling other people about it. Aaron married Sharon in 2003, and the couple quickly decided that God was calling them to start the Maryville Vineyard. They planted the church in 2004. Before he became Lead Pastor of the Vineyard, Aaron attended Lee University and graduated in 2002 with a BA in Pastoral Ministry. He also worked as a counselor and worship pastor prior to the Vineyard. It is Aaron’s greatest desire to help more people know and understand the gospel. It is his mission statement and the measuring stick for any decision he makes. “To save the whole damned world,” as he often says. Literally taken, this is the mission of Jesus, it is the mission of the church, it is what we are called to do. When Aaron’s not focusing on writing sermons, organizing church events, or doing other pastoral things, he really enjoys playing and watching basketball, listening to music, and spending time with his favorite three people in the world: Sharon, Bryce, and Bree. Aaron is also an avid reader and podcast listener, and he loves listening to podcasts at 2x speed, where the speech is just barely intelligible, so he can listen to as many as possible. Aaron’s best ‘stupid human trick’ is that he can tell the number of letters in words almost instantly.* If you’d like to learn more about him, you can visit his blog. Or better yet, come on by the Vineyard one Sunday and he’ll be more than happy to meet you in person! *Please do not abuse this knowledge by tossing large words at him, expecting him to say a number! He’ll know the answer, but once he starts, he can’t stop. And then he gets weird!