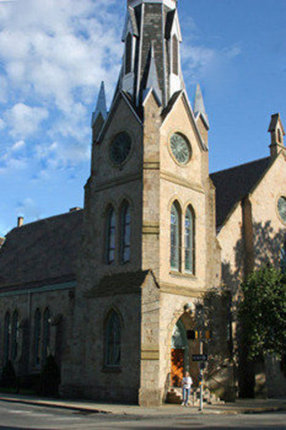 The congregation now known as Franklin Street Church, Johnstown PA, was first started as early as 1809 as a "circuit" stop for the Methodist Episcopal Church in the Pittsburgh District. The people first met in various homes in the area and by 1811 had begun worshiping in an old school house, known as "old Blackie". By 1819, the congregation had grown into a full fledged church and became recognized as such and became a part of the Pittsburgh District. In 1838, the congregation purchased a lot at the corner of Franklin and Locust Streets. The sum paid was $405.00 and a new building was erected and dedicated in that same year. In 1852 that building was raised and another was erected in its place, a two story brick building, completed in 1853 with a seating capacity of 500.

In subsequent years, 1865 and 1866, properties adjacent to the original lot were purchased for $1,500.00 and $2,500.00 respectively. Shortly thereafter, ground was broken and construction of a "chapel" was started behind the existing church. When the chapel was completed, the congregation began to worship there while the brick church was raised and construction started on the present sanctuary building.

Three years later, on October 29, 1869, the New Methodist Episcopal Church was dedicated. The edifice of the new structure is of pure Gothic architecture, built of native sandstone, most of it procured from the dismantling of the abandoned Locks of the Old Pennsylvania Canal, at a significant cost savings. The capacity of the new building was "comfortably seating for 840 in the pews, with room for 100 with the addition of settees and chairs".

In the spring of 1889, the first parsonage for the pastor of the Methodist Episcopal Church was dedicated next to the church at 135 Franklin Street. It was here, two months later, on the night of May 31, 1889, that Reverend H.L. Chapman D.D. and his family found refuge in the attic, as the massive church building became the first structure to withstand and challenge the devastating wall of water that descended on Johnstown from the South Fork Dam. Splitting the water into two separate paths, the presence of the massive stone church saved the new parsonage as well as many buildings and the lives of those in them on Main Street.

Immediately following the Flood, the work was started on cleaning up and repairing the chapel so that services could be held. The sanctuary was reopened in February of 1890, with the addition of a new pipe organ, funding for which had been raised prior to the flood and had been 'saved' from the flood in the bank.

In 1912, part of the chapel building was raised to construct a Sunday School building.

A balcony was added to the sanctuary in 1914, following the Billy Sunday Evangelistic Campaign. increasing the seating capacity in the sanctuary by 275.

In 1928, another remodeling was undertaken to create an "open chancel". Anew pipe organ was installed, and the chancel area was reconfigured with "communion rail open at the center, pulpit and lectern at either side, choir stalls facing the center of the chancel rather than the people, and the altar with superimposed reredos occupying the center of attention. The chancel woodwork, beautifully carved by the Delong Company of Philadelphia, is a work of art". It is this sanctuary that is still seen today.

On March 17, 1936, Johnstown was again inundated by a major flood and with it, the Franklin Street M.E Church. This time there was no major dam break, but considerable damage was done. The pipe organ was almost completely destroyed, as were the pews and the carpet. Plaster was damaged and decorations and other furnishings suffered from the water. Seven pianos were destroyed.

Following the Johnstown Flood of 1936, the Army Corp of Engineers undertook a river channel project that promised an end to Johnstown's flooding problems. The cement river walls prevented the overflowing of the rivers that had resulted in the 1936 flood and smaller flooding problems for years. Johnstown was declared to be "Flood Free".

But, on July 20, 1977, that title was challenged when a massive storm came to the valley and stayed, pouring over 1 foot of rain into Johnstown in a matter of hours. The rivers rose over their banks and several earthen dams broke and by morning, Johnstown was under 9 feet of water. And with the city, also, the sanctuary of the Franklin Street Church. Once again the congregation cleaned up and rebuilt, adding a third high water mark to the back wall of the sanctuary, not nearly as high as the one from 1889, nor quite as high as 1936.

It is important to note that Franklin Street Church is one of only four buildings, and the only church, in Johnstown that survived the 1889 flood and is still standing.