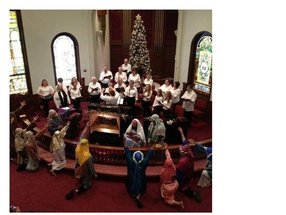 We are a Bible based community in the Wesleyan tradition. Our mission statement is: "Knowing Christ & making Him known" We believe all people are in need of God's grace through faith in Jesus. We endeavor to be conduits of this grace through outreach & evangelism, ministries to the marginalized, worship, and discipleship.

Pastor David first accepted Jesus as his Savior and Lord as a 6th grader going through confirmation class at St. Paul UMC in Jacksonville, Florida. It didn’t take long, however, for him to grow away from God. He stopped attending church, almost never prayed and read very little of the Bible. He became a self-reliant man. Thankfully, God never gave up on him. As a cadet at the Virginia Military Institute (VMI), he started to attend church every Sunday. For somewhat impure reasons, he also became active with the Baptist Student Union (BSU). The BSU consisted of students from various area schools. Since VMI was all male at the time, he attended BSU just to be around pretty young ladies. Although his motives were not pure, God used his time at the BSU to develop a longing within his heart for God's love. This longing came to fruition a few years later when he rededicated his life to Jesus while serving as a soldier in Korea. After graduating from VMI, he became an Army Military Intelligence Officer. As a 2nd Lieutenant, he received the opportunity to attend the U.S. Army Ranger School. This is one of the toughest leadership schools the Army has to offer. You’re graded on how well you can lead extremely tired and hungry men under realistic combat conditions. He passed only because of God’s intervention. There were many times when God provided just the right person at just the right time to help him get through a graded leadership event. For example, during the 15 mile forced march, he was carrying a very heavy M-60 machine gun and not going fast enough to keep from being picked up by the truck at the rear of the column. Right before the truck caught up to him, a rather large Ranger candidate came up beside him, took the M-60 machine gun and gave him his much lighter M-16 rifle. With that, he was able to quicken his pace and complete the road march. He has no idea who that person was. It could have been an angel. He first received the call to ministry while attending Ranger School. During one of the patrols, he was thinking about how God was enabling him to pass. He realized there was no way he could pass on my own. That’s when the idea of becoming a pastor entered his head. He quickly shoved the idea out of his head because he wanted to be a famous Army General. Approximately 2 ½ years later, while praying in his apartment in Hinesville, Georgia, he surrendered to God and decided to become a pastor. When he was about to leave the Army to pursue the ministry, his wife Jackie became pregnant. In order to keep the health insurance for his wife and unborn child, he decided to stay in the Army a while longer. During her sixth month of pregnancy, Jackie developed preeclampsia, a disease characterized by dangerously high blood pressure during pregnancy. If left untreated, both the mother and infant could die. As a result, his daughter, Sarah, was born a little over three months early. After struggling for seven months in the neo-natal intensive care unit (NICU), Sarah died and went home to be with the Lord. This was an extremely painful time for David and his wife. They were suffering. Although God doesn’t cause suffering, He can use suffering for good. That’s what He did for them. For a very long time, Jackie was angry at God. She wanted nothing to do with God or children. The pain was too great. One day, while David was on maneuvers, Jackie was alone in their apartment with pills in one hand and wine in her other hand. She was contemplating how she could stop the pain permanently. At that moment she decided to talk to God. She said, “God, I’m told you can take this pain away from me. So, before I end it all, I’ll give you a chance.” From that moment on, Jackie began her intimate, loving relationship with God through faith in Jesus. Although she never stopped missing Sarah, the pain went away. God healed her. A few years later, she became a pre-school teacher. God used our infant daughter Sarah to bring us closer to Him. We serve a great and loving God. Soon after Sarah’s death, David left active duty, joined the Army Reserves and started the process to become a United Methodist pastor. After spending 4 years as a Juvenile Probation Officer (JPO), he became a student at Asbury Theological Seminary. He also became a part-time student pastor at Lake Como Community United Methodist Church. On February 13, 2007 his son, Joshua, was born. This joyous event was soon followed by tragedy. Early morning on May 26, 2007 Jackie, Joshua and David were driving south on highway 17. A drunk driver heading north hit them head on. Joshua and David received minor injuries but Jackie was killed. God’s grace gave David the strength to get through this event and begin to raise his son as a single father. God’s grace also gave him the strength to attend the sentencing of the person who killed his wife. During the sentencing he verbally forgave the person and told him the good news about God’s offer of forgiveness. While he was in prison, David wrote him a few letters and further explained God’s love for him. God used David in a powerful way. In July 2008 David became the pastor at Glynlea Grace UMC in Jacksonville, FL. Soon after that move, God provided Joshua and Pastor David with a lovely lady named Donna. On April 4, 2009 David married Donna. She’s a wonderful wife and an awesome mom. God is good. On January 15, 2012 David became the pastor at First UMC of Sanford. He looks forward to see how God will use this congregation to impact the Sanford community.