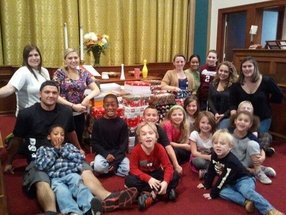 Here, you will find us to be a group of active and involved believers continually seeking to deepen our relationship with our Savior Jesus.

This includes classes on Sunday mornings and mid-week for believers of all ages, powerful messages during our church services, and a wide variety of music from contemporary Christian to traditional hymns. We also maintain a great desire to help others in the community and in other parts of the world.

In everything we do, our goal is to fulfill our mission of "reaching people for Christ, stengthening their faith, and transforming lives through His love."
Come visit us! You'll find a friendly and inviting church excited to serve the Lord as He would lead.

What are services like?
FBC has worked tirelessly at a blended service to celebrate and praise the Lord in a variety of ways. This would include contemporary praise music with a full band, a full choir, traditional music, personal and heartfelt prayer, involving the children, Biblical preaching, powerful personal testimonies, and much more!

What is the community like?
First Baptist is a multi-generational community that reaches out to all age and demographic groups. The church is an active, involved, and inviting community - praying; worshiping; singing and playing music; doing hands on mission work overseas, in the US, and locally; playing sports, practicing music; serving; loving; and praising God for His love.

What if I'm not a Christian?
All are invited to come experience the Lord at First Baptist - from those seeking understanding about life, to those struggling with challenges, to those who hope to deepen their relationship with the Creator. Becoming a follower of Jesus does not mean that you decide to start attending church regularly, purchase a new Bible, or start giving to the poor. While those are all great things that Christians and non-Christians do, it is so much more than that. The first and most important thing is to understand who Jesus is, and what he came to earth to do.

Doug Valentine was raised in an American Baptist home as the third son of Rev. Don and Carol Valentine. He grew up in the church as a pastor's kid and accepted Christ as a teen. His times as camper, counselor and cook at Camp Grotonwood were formative and inspirational. As a first career engineer, he was active in the lay ministry at Quaker Hill Baptist Church in Connecticut, including serving as deacon, youth leader, and youth & adult Sunday School teacher. Following the end of his first marriage, Doug found himself raising his two small children on his own. The experience allowed him to grow deeper in his faith and minister to others facing loss and betrayal. Sixteen years ago, Doug and Jackie met, fell in love, married, and blended their families. Soon after their engagement, God called Doug into pastoral ministry and the family stepped out in faith, accepting God's call to Princeton Theological Seminary. Pastor Doug graduated from Princeton in 2000 and accepted a call to a nearby church in New Jersey. The Valentines completed their family in 2001 with the adoption of their youngest daughter, Grace, from Vietnam. Pastor Doug celebrated ten years of ordained ministry in 2010 at The First Baptist Church of Kansas City, where he currently serves as senior pastor. His spiritual gifts include preaching, teaching, pastoral care, discipling, visitation and church growth. He seeks to bring the mercy, favor, and hope of Christ to all. Pastor Doug participated in the Nehemiah Leadership Network, an American Baptist ministry expressly for preparing transformational leaders. He leads with what many describe as a contagious enthusiasm for Christ and His ministry here on earth through us. His wife, Jackie, is active in church ministry and works as a teacher in the urban core of Kansas City, Kansas. She claims her first church ministry is to love the pastor, which is a job she takes seriously. She cherishes her family and the close relationships she has with Doug and their four children. Their son Ben is 24, lives in NJ, and works as a restaurant manager. Jen, Cassie and Grace live at home. Jen is 21 and already a 4th grade teacher. Cassie is 19, studying for her business degree, and working part time at Best Buy. Grace is 10, has just entered 5th grade, plays piano & cello and is soon-to-be a black belt in Tae Kwon Do. Pastor Doug enjoys time in worship and prayer. When he is not ministering directly to his flock, he enjoys time with his family, hiking for miles while listening to Christian music, kayaking, reading, and being still and knowing God and God's blessings.