The one, the only, the original... Would sound lame if it were not true! Gilbertsville, PA 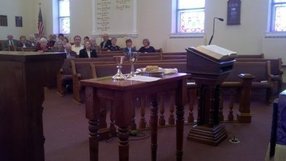 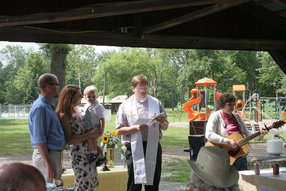 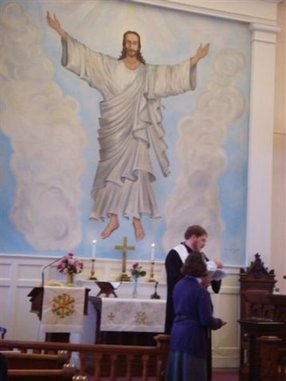 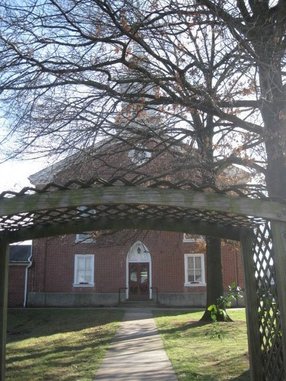 We are nearing our 300th birthday but we are not trapped in the ideas of the past. We are not for you if you want to be a number or want your religion spoon fed to you. We do not sugar coat our faith. We challenge you in ways you may never have been before. Buckle Up and hang on. Our Faith is real.

What are services like?
In some ways very traditional. White Male Minister stands under 16 foot tall Jesus with hammertoes. But do not let the white guy fool you. This is not your grandmothers church.

What is the community like?
Diverse and dynamic. People drive up to 30 miles in each direction to come worship with us.

What if I'm not a Christian?
So what... Funny you don't look Christian is a complement here. 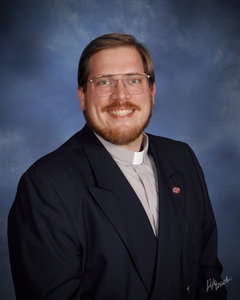 Rev. Carleton H. Borden Rev. Carleton was called as our minister on December 4th 2011 to begin as their 21st settled Minister starting January 2, 2012. In 2010 He was selected to be one of fourteen members of the first class (class of 2021) of the United Church of Christ (UCC) Pension Boards Next Generation Leadership Initiative Target 2030. He earned his Master of Divinity degree in 2006 from Andover Newton Theological School; with specific concentration in 'Theology in the Public Life' and 'Youth & Young Adult Ministries'. He also has a BA from the University of Massachusetts - Amherst. He was ordained in the Northern Plains Conference UCC in 2007. Prior to coming to Falkner Swamp Rev. Carleton was the minister and Teacher [2007-2011] of Congregational United Church of Christ in Valley City ND. During his time with the Valley City Church the church was named the AMISTAD SOCIAL JUSTICE CHURCH of the NORTHERN PLAINS for the years 2010 - 2011. Up until that point only one other church in all of Canada & North Dakota had been given such an honor. He served as a student pastor [2004-2005] at the Evangelical Congregational Church United Church of Christ of Harvard , MA (the town not the university). He had one unit of CPE earned at the Berkshire Regional Medical Center in Pittsfield, Massachusetts. He was originally sponsored as a student-in-care by the Glen Ridge Congregational Church, New Jersey Association, Central Atlantic Conference UCC. Rev. Carleton brings a wealth of ministerial, administrative and programmatic experiences from his years as a professional in the Boy Scouts of America (BSA), working as a District Executive (DE) Twin Valleys District and Southern Valley District in the NNJ Council, BSA. As a DE he was involved in fundraising, capital campaigns, marketing, recruitment, leadership training, professional development, youth protection, and child abuse prevention. In his time with the BSA Rev. Carleton worked in and ran Summer Camp operations on Scout Reservations in New York, New Jersey and Massachusetts. He received numerous awards and recognitions during his time as a DE. Including but not limited to Quality District Award and Chief Scout Executive Winners Circle & the 20 Years of Active Scouting Award. Rev. Carleton has been recognized for his over 20 years outdoor camping & camp operations experience. He is a Life Member of Alpha Phi Omega, the National Co-Ed Service Fraternity, Kappa Omicron Chapter. An Eagle Scout and is a Life Member of the National Eagle Scout Association, Brotherhood Member of the Order of the Arrow. He is a member of the Sons of Norway, the Old Guard of Glen Gray and in the U-Mass Amherst Alumni Association. He was an avid cook and published a cookbook while at Andover-Newton Theological School. Besides the Scouting experience he also served the Northern Plains Conference as co-Adjunct Youth Program Ministers and advisor to the Northern Plains Council of Youth & Young Adult Ministries and also a certified Justice Leaders Engaging in Dialogue (J-LED) trainer. We take great pride that he is invited to be active at the regional and national levels of the UCC. Rev. Carleton has served on the 2010 Western Regional Youth Event Planning Team also picked to be part of the 2012 National Youth Event Visioning Team. He worked with the Media, Public Relations and Communications subcommittee. He has had attended the 2007 General Synod in Hartford Connecticut, the 2008 National Youth Event (NYE) in Knoxville Tennessee, the 2009 General Synod in Grand Rapids Michigan and the 2010 Western Regional Youth Event in Billings Montana. In 2010 he was invited to the National Church House in Cleveland Ohio for the LinK Event (Leaders in Koinania) for Youth & Young Adult Ministry. In 2011 he attended the General Synod 28 in Tampa Florida. He did a presentation at General Synod 28 on the 2012 NYE. He was even videotaped in a General Synod flash mob Eucharist. He attended the 2012 NYE. And will attend the 2013 General Synod in Long Branch California. With all the work Rev. Carleton does for the church he also makes time to have hobbies outside the church, hear Rev. Carleton Borden speak about one of those hobbies (Vexillology: the scholarly study of flags, banners & standards) on a broadcast of the Prairie Public NPR radio show 'Hear it Now with Merrill Piepkorn': which was heard on North Dakota, and Minnesota National Public Radio stations: http://www.prairiepublic.org/radio/hear-it-now/?post=18493