Faith and Love Church of God in Christ

Through Faith we have life, Through Love we share it. Fort Worth, TX 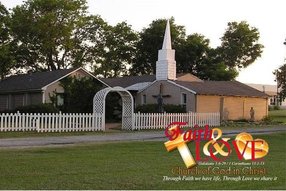 Our Mission is to develop a Christian Faith that continues the loving work of Christ as outlined in Luke 4:18-19

We seek to share the liberating experience of salvation through Jesus Christ (2 Cor. 3:17, John 8:36)

We press to develop in ourselves a Holy lifestyle because God has commanded us to be Holy (Lev. 19:2, Phil 3:14)

Our inaugural message speaks to this mission. Please listen to the sermon "A Church on a Mission" to hear more about what we believe is our God given mission.

Elder Edward L. Spears, II has been an active member of the Church of God in Christ since the days of his youth. He began his Christian experience as a young child when he and his mother joined House of Faith, Church of God in Christ, in New Orleans LA. Under the loving and wise tutelage of Superintendent Benson Magee, Pastor of House of Faith, he grew strong in the Lord and faithful to the work of the church. In 1999, he submitted to the call of the Lord and received his minister’s license at the hand of his Pastor and mentor, Superintendent Magee, and in 2003, he was ordained as an Elder in the Church of God in Christ by the late Bishop Joseph Anthony Thompson, former presiding Bishop of the Louisiana East Second Ecclesiastical Jurisdiction of the Church of God in Christ. Elder Spears considers himself truly blessed that the Lord allowed him to be married to Suzette G. Spears and that the Lord entrusted he and his wife with the charge of raising their five children (Marcel, Stephawn, Megan, Edward III, and Elizabeth) in the way of Holiness. (www.spearscentral.com) In 2005, the Lord allowed Hurricane Katrina to move Elder Spears and his family from New Orleans, Louisiana to Fort Worth, Texas, where they became members of Greater Love Chapel, Church of God in Christ, under the leadership of Evangelist and Superintendent Jimmy W. Glenn, Sr. They remained members there until 2008 when God led Elder Spears to establish Faith and Love, Church of God in Christ in the west Fort Worth/White Settlement area. Elder Spears believes that God is able and willing to bless believers that show TRUE faith in Him. Elder Spears believes that after a prayer of petition has been made, it is now time for the believer to put forth the effort, WORK, required to be in a position to receive that which the Lord has promised. TRUE Faith is shown by the actions of the believer. Take the first step by doing all you can to prepare for your blessing Realize the way the Lord manifests your blessing may not be how you think or expect it should be Understand that “not yet” does not mean “NO” Expect that the blessing IS on the way (Elder Spears' professional resume can be found at www.EdwardSpears.com)

View churches near Fort Worth, TX