Cornerstone Baptist Church is a body of believers who love God, & seek to bring Him Glory by serving others

What if I'm not a Christian?
God Loves You! 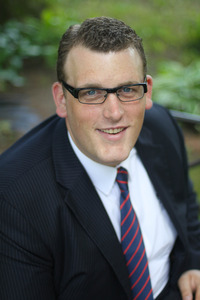 Although Pastor Ian Brown had attended church on and off during his childhood near Ann Arbor, Michigan, it wasn't until hitting rock bottom later in his adult life that he saw his need of a Savior. Enjoying a successful career as an automotive technician at Toyota and Lexus dealerships, Pastor Brown came to a point in his life where he looked around and asked himself, "Is this what life is all about?" Turning to drugs and alcohol to fill the void in his life, he found himself emptier and more broken than ever before. Spinning out of control, he cried out to God with this simple prayer, "God, if you're real, show yourself to me" (Jeremiah 33:3). Two weeks later, kneeling next to his bunk in the Livingston County Jail, he cried out to God again, this time simply saying, "Lord save me!" (Romans 10:13). Immediately he felt a fire inside his heart (Jeremiah 20:9, Luke 24:32) and began writing letters to family and friends, telling them about the good news of the gospel! Soon after, while reading in the book of Isaiah, his heart was greatly stirred while contemplating this passage; "The LORD hath called me from the womb; from the bowels of my mother hath he made mention of my name. And he hath made my mouth like a sharp sword; in the shadow of his hand hath he hid me, and made me a polished shaft; in his quiver hath he hid me; And said unto me, Thou art my servant, O Israel, in whom I will be glorified." From that day on, Pastor Brown knew that God had called him to be a preacher of God's Word. He began to get his life straight and clean. He enrolled in Grace Bible College in Gaylord, Michigan, where he not only attended the school, he also became a member of the church staff. During his tenure in Gaylord, Past Brown directed the church's bus ministry for three years, taught high school Bible classes in the Christian school for two, and served fervently in the public and Christian school teen ministries, as a counselor, a mentor, and even a high school football coach. It wasn't until August of 2012 that God began to move Pastor and Mrs. Brown's hearts away from their ministry in Michigan. Through a long year of much prayer and fasting, God began to miraculously open doors and led Pastor Brown to Cornerstone Baptist Church. The Brown family has lived in Beulah since August of 2013 and are serving, with joy, the communities of Beulah, Hazen, and beyond. Pastor Brown has been married to his wife, Fan, for five years and they have two beautiful children, a daughter Lydia and a son, Declan. They also have an "escape artist" Husky named Mitch. When not ministering to the community or his family, Pastor Brown is currently pursuing his Doctorate of Divinity from South Indiana Baptist College. Pastor Brown has had the opportunity to preach at camp meetings, youth conferences, missions conferences, and even a pastors conference, but his heartbeat is with the people of Mercer County, as he labors with and for them in the name of the Lord. If you would like to set up a meeting for counseling with Pastor Brown, feel free to call (701) 873-2683 or e-mail him personally at [email protected]