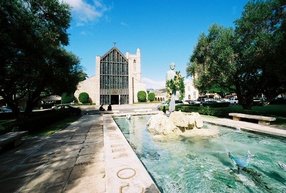 About St. Andrews: (Fun fact - St. Andrew's is the only church in Hawaii invited to the islands by the Hawaiian Monarchy).

King Kamehameha IV and Queen Emma were responsible for bringing the Anglican Church to Hawai’i. The first services of the church were held on October 12, 1862, amidst a time of mourning for the young Prince of Hawai`i, the only son of the King and Queen who died shortly before the arrival of the Bishop. The King and Queen gave land, part of their royal garden, on which the Cathedral was to be built.

The Queen proceeded on her own to lead the project; she traveled to England to raise money to build St. Andrews. Cathedral was completed in time for Christmas 1886, in great part because of the support for the Queen’s vision of the Cathedral as a memorial to her husband. Queen Emma did not live to worship in the Cathedral. She had died the previous year on St. Mark’s Day 1885 but her legacy and her vision to preserve the spiritual health of her people lives on to this day.

What are services like?
Services are traditional masses every Sunday at 7am, 8am (in Hawaiian), and 10:30am (sung eucharist). On Mondays, Tuesdays, Thursdays, and Fridays, there is Holy Eucharist from 11:45am to 12:15pm (Thursday service is set apart specifically to pray against human trafficking) Wednesdays Holy Eucharist is given at 12:15pm

What if I'm not a Christian?
We welcome all people regardless of religious belief or lack thereof. For those searching for truth in faith, please contact us to find out about our Formation classes. 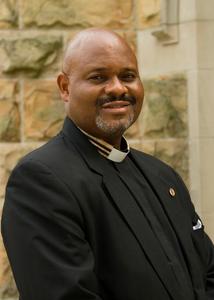 The Reverend (Fr.) Walter Brownridge is an Episcopal (Anglican) Priest from the Diocese of Ohio currently serving as Dean of the Cathedral of St. Andrew in Honolulu, Hawaii. Formerly, he was Associate Dean for Community Life at the School of Theology, Sewanee: The University of the South. His principal duties concern the overall formation of seminarians for the priesthood and to facilitate their formation in a variety of aspects beyond academic their work. This work involves the spiritual, emotional, family, vocational, psychological and financial lives of seminarians and their families. Fr. Brownridge is a member of the faculty who areas of teaching and research are Missiology, Canon Law and Ethics (focusing on Church and Society). Prior to his appointment at Sewanee, Fr. Brownridge served in the Diocese of Cape Town, South Africa (The Anglican Church of Southern Africa he was a Canon at St. George’s Cathedral in Cape Town. St. George’s Cathedral is the Mother Church of the Anglican Communion in Southern Africa. It is the seat of the Archbishop of Cape Town where many illustrious bishops have served including The Archbishop Emeritus Desmond M. Tutu. At St. George’s Fr. Brownridge first served as Canon Precentor in charge of liturgy and worship. He later assumed the title as Canon Pastor responsible for pastoral care, the Cathedral HIV/AIDS ministry and the Cathedral’s participation in the International Cross of Nails, a global network involved in the ministry of justice, peace and reconciliation. Prior to his South Africa tenure, Fr. Brownridge served as the Assistant Rector of Christ Episcopal Church in Shaker Heights, Ohio. Prior to entering seminary to study for the Episcopal Priesthood, Walter practiced law and worked in public policy for ten years. In Washington, D.C. Walter served as Special Counsel and Assistant to a U.S. Senator. Walter served for four years as a Trial Attorney in the Criminal Division of the U.S. Justice Department prosecuting white-collar crime. He later moved to Cleveland, Ohio and served as Executive Assistant to the Mayor/Counsel to the Chief of Police for the City of Cleveland. Fr. Brownridge has long maintained a scholarly and personal interest in political theology and the role of religion and faith-based organizations in public policy. He has served on the Episcopal Diocese of Maryland’s Commission on Racism. In the Diocese of Ohio he served on the Peace and Justice Commission and The Episcopal Peace Fellowship. Fr. Brownridge is a member of the Episcopal Church’s National and Ohio Public Policy Network. He has lectured and written on the issues of race, public policy, and the role of the church. Walter is a member of The Potomac Coalition, a political and public policy group whose primary (but not exclusively) membership is African-American professionals who are interested in the political and economic development and opportunity in the urban America. In the areas of Professional Development Walter completed National Leadership Training in Community Organizing led by the Gamaliel Foundation (2002), a National Institute that promotes, trains and support Faith – Based community Organizing. Fr. Brownridge completed training in Multi-cultural Congregational Leadership through a program in the Diocese of New York under the direction of the Revd. Eric Law (2000). Fr. Brownridge’s experience in South Africa has highlighted for him to the vital role of spirituality and pastoral care as a matter of personal and community development. In South Africa, he has studied and trained in Spiritual Direction and Pastoral Counseling and as a facilitator for Labyrinth workshops through Veriditas (2005). Fr. Brownridge is the author of an article published in the religious journal Fellowship Papers entitled “We’ve Come this Far by Faith: Reflections on Afro/Anglican Catholicism Past, Present, Future”. Fr. Brownridge is a graduate of John Carroll University with a B.A. in Political Science (1978). He holds a M.A. in International Relations from the University of San Diego (1985) and a J.D. from Georgetown University (1987) and a Masters of Divinity from the General Theological Seminary in New York City (2000). While pursuing his three post-bachelor’s degrees, Walter developed his political and academic interest in South Africa. Fr. Brownridge has written on South Africa from the diverse perspectives of law, politics and theology. Walter has been married since 1982 to his wife, Christina Nader – Brownridge. They are the parents of two sons, Alec Thurgood (born in 1990) and Martin Desmond (born in 1995).