Our mission is to delight supremely in God through Jesus Christ,
by the power of the Holy Spirit,
for the glory of God's name and for the good of neighbors and nations.

What are services like?
At Berlin Church we love children and welcome them in worship with their family. We believe that with younger children, more is "caught" than "taught." So when children see their parents worshiping, they learn that God is worthy of worship. They also learn the importance of hearing God's Word read and proclaimed and of singing praises to God and talking with God in prayer. They learn that the family of God is made up of all ages, and that it is a gift of God to enjoy fellowship with others in the body of Christ. We seek to use the best of the old and the best of the new. We are committed to including great hymns of the church on a regular basis, and we also use what we believe are the most God-centered, Christ-exalting and Bible-saturated contemporary songs of praise and worship.

What is the community like?
It is a community of people who have been rescued by the grace of God and are being transformed by the Spirit of God and who welcome others with the grace they have received from Christ.

What if I'm not a Christian?
You are welcome to worship with us and take part in our life groups that meet throughout the week. Feel free to ask any questions about God and what it means to be a follower of Christ. 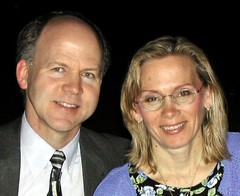 Rick Negley was born in Omaha, Nebraska and grew up just outside of Omaha, graduating from Ralston High School in 1976. After high school, Rick’s interest in music ministry led him to enroll at Bethel College (now Bethel University) in St. Paul, Minnesota, to pursue a degree in music. But God had other plans, and Rick instead earned a B.A. in Biblical and Theological Studies. During his years at Bethel, Rick had the opportunity to study with John Piper, who served as Rick's mentor and who was used by God to greatly influence Rick’s life and ministry. After graduating from Bethel in 1980, Rick moved to Pasadena, California, where he earned a Master of Divinity degree from Fuller Theological Seminary. At Fuller, Rick met Karen Nelson (who grew up as the daughter of missionaries in Cameroun, West Africa) and they were married on July 9, 1983. In 1984, Rick and Karen moved to Delaware, Ohio where Rick became the pastor of Old Stone Presbyterian Church. During their years at Old Stone Church, daughters Anna and Mary were born. When they left Old Stone Church in 1990, the Negleys explored possible positions in overseas missions while they worshiped at Northside Fellowship Presbyterian Church in Westerville, Ohio. Rick was called to serve as associate pastor at Northside and the family enjoyed 15 years of ministry there. While at Northside, daughters Naomi and Hope were also born. Since 1994, the Negleys have lived next to Berlin Presbyterian Church in Lewis Center, Ohio. When Rick learned in 2004 that the church was going to be without a pastor, he talked with elders at Northside Fellowship and at Berlin Church and it seemed that God was leading the two churches into a shared ministry. In 2005, Rick was called to be the pastor of Berlin Church while remaining on the pastoral staff of Northside Fellowship. Rick enjoys music, especially playing guitar and electric bass. With a twin brother who owns a bicycle shop, Rick has developed an enjoyment of bicycling. Being from Nebraska, Rick also enjoys University of Nebraska athletics. But Rick seeks to delight supremely in God through Jesus Christ. With his family and brothers and sisters in Christ, Rick desires to help neighbors and nations to also delight supremely in God through Jesus Christ. If Rick had to choose one verse of the Bible as a life verse, it would be Psalm 16:11, which says, "You make known to me the path of life; in your presence there is fullness of joy; at your right hand are pleasures forevermore."