"Allowing God to work in us - through us - around us Shoshone, ID 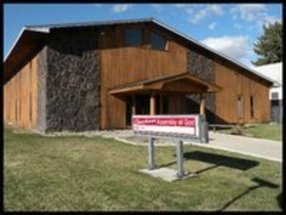 We are a group of ordinary folk that are on a journey.

Day by day, week by week, month by month, as we read, study and hear God's Word taught in Sunday School, preached during each service, and then read by us during the week, we discover more and more who the God of the Bible really is.

In fact, the Bible says that the God, who made the universe, also knows everything about us - down to the number of hairs on our head!

As we learn more and more about Him and His perfect love presented to us in the form of Jesus Christ, we cannot help but fall in love with Him. Then, as we take the next step and make Him our Lord and Savior, as we allow Him to work IN us, we become more like Him! When that occurs we will desire to be used by Him - however He wishes. 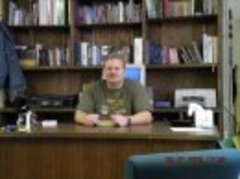 I am a native Idahoan, and was born in 1963, in Hailey, to, now retired, A/G Pastors; J Wesley and Joyce Johnson. I am the 2nd of two children. Yes-the baby of the family! Less than three years after my birth my dad took a pastorate in Shoshone, Idaho and while there I finished 6th grade and a part of 7th grade. It was during my 7th grade year at Shoshone that my Father felt led to pastor in Hazelton, Idaho. In that time-frame I finished my High School education, got my degree in Law Enforcement at CSI, and then in 1983, joined the US Air Force as a Law Enforcement Specialist. Later, in 1990, while still in the military, I cross-trained into Aircraft Electrical and Environmental Systems on C-5 cargo planes. In 1984, while stationed at Edwards Air Force Base, California, I married my sweetheart Kim who I had first met at Bellevue Bible Camp several years prior. (Just a side note here: Don’t ever tell me that a Christians' steps are not ordered of the Lord!) Our 3 children were all born while in the Service. In 1992 my 2nd enlistment ran out and I was honorably discharged after a little more than 9 years. Kim tells me that she has always known that the Lord had called me to be a Pastor but it took me a long time to figure that out for myself. It wasn’t until 1998 that I finally was stopped long enough by God through a series of events to realize the calling that He had placed on my heart. Prior to that year I would have bet my life that I would never be a Pastor. You see, Pastors have to talk in front of people and that certainly wasn’t my thing. I almost flunked a high school speech class to prove my inability to speak in front of people! BUT GOD! From 1998 until 2001 I finished my Bible School Courses. Although I felt that I was academically “ready” to be a pastor; God didn’t seem to be impressed with some lagging character issues and consequently things weren’t falling into place like I had envisioned. He knew, along with the myriad of other lessons yet to learn, that I still had one huge lesson to learn that couldn’t come from a book. I had to learn about waiting on God’s timing. That was five of the toughest years I have ever known. Prior to this time I had always done things in Mark’s timing which was of course, right now. For half of a decade God chiseled away at my heart and life until He finally broke me and got rid of enough of “me” to finally develop me into a person that He could use. I am here today to tell you that God means what He says and says what He means. The Bible says that if you seek Him with everything that you have, that He will give you the desires of your heart (Mark Johnson Translation). The problem was that in 1998 my desires were not lined up with God’s desires because I wasn’t seeking Him with everything that I had. But, those years of waiting on God allowed me to see myself as He views me. The closer I got to Him, the more light that was shed on my life and heart, the more gunk that I realized had to come out of my life. It was a slow, but very worthwhile, period in my life. Then, almost exactly 40 years from the time my father came to pastor Shoshone in 1966, I was afforded the opportunity to do the same. I have always loved Shoshone. I loved the people, the place, the location, and, for the most part, even the weather. God is sooooo good! If you haven’t already done so, give God total control of the wheel of your life. He is an awesome driver! By the way: Now that God has put me into this role as under-shepherd, I no longer feel prepared either academically nor in any other way. The more I study God's Word and thus the character of God, the more I discover how much I still do not understand. But, who wants a God that is so small that they can figure Him out. I realize now that God has me right where He wanted me to be a long time ago - relying totally on Him!