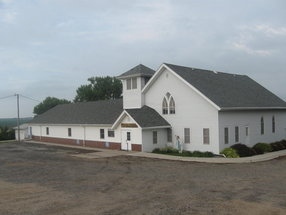 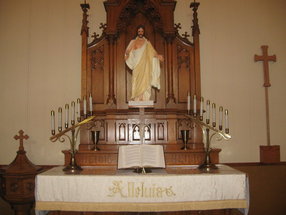 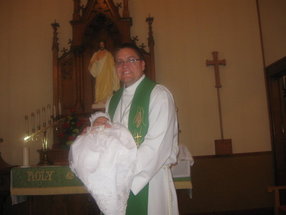 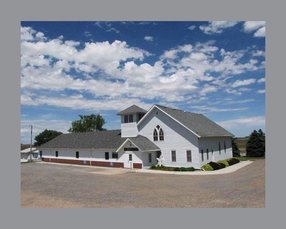 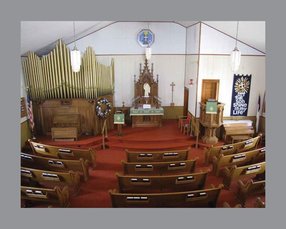 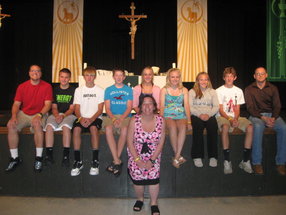 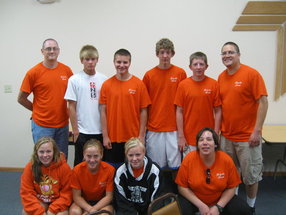 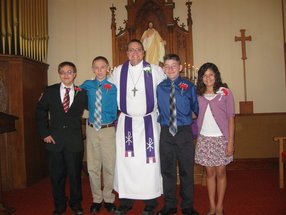 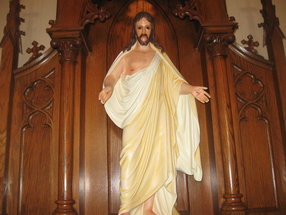 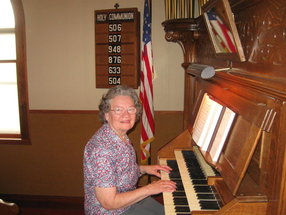 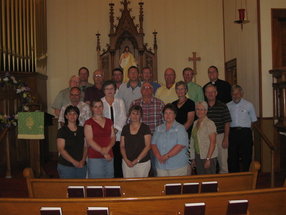 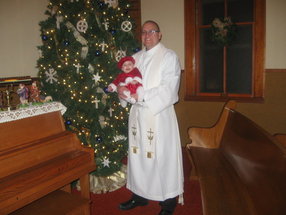 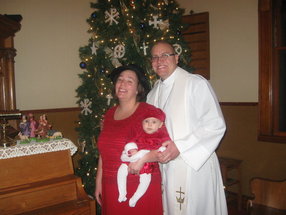 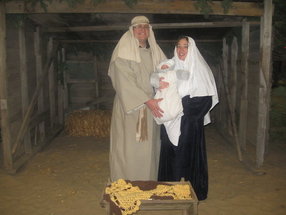 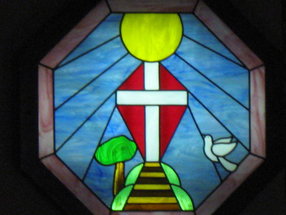 It is the mission of Golgotha Lutheran Church to touch people with the message of God's love and eternal life through His Son Jesus Christ through a caring ministry of reaching, teaching, and serving the community and our congregation by the work of the Holy Spirit through Word and Sacrament.

Golgotha's History... It was early as 1884 that some of those who later became members of Golgotha Lutheran Church were served by a Lutheran pastor. The Reverend Theodore Moellering of Bazille Mills occasionally preached in the homes of scattered Lutheran families living east of Creighton. Later Fairview Schoolhouse, seven miles east and two miles north of Creighton, was used by these few families as their house of worship.
In 1891 Pastor Moellering was succeeded by Rev. F.H. Jahn. Besides the congregation at Bazille Mills, then a thriving little town in Knox County, this veteran of the cross also conducted services at Plainview and Bloomfield. The next year he began to preach at Orient, then a post office eight miles east of Creighton. Since there was no centrally located school house in the neighborhood, services were held in the homes of the families that attended church. Because of the extensive territory Pastor Jahn had to serve- traveling was all by team or on horse back- there was but one worship a month at Orient.
Among the people attending services at that time were: Leonhard Doerr, Sr., Otto Moeller, Christ Repenning, Frederick Manke, August Gieselmann, Frank Krugmann, Karl Krugmann, Ehler Hoppe, and their families and others.
When in the following years a number of German Lutheran families settled southwest of Wausa, among them William Krohn, Sr., Daniel Lorenz and William Boldt, expressed the wish to worship with their fellow Lutherans further west, it was decided by all concerned that services were to be held ion a place most centrally located. The school house of District 132, one-half mile north and one-half mile east of the present location of Golgotha Lutheran Church, was chosen as a meeting place. For a number of years this school house served as a place of worship for the German Lutheran families of Columbia and adjoining townships. Pastor Jahn served this preaching station until the summer of 1895.
That year Pastor Albert Ollenburg was called to First Trinity Evangelical Lutheran Church of Bloomfield, Nebraska. To him was also assigned the little flock of Lutherans in and around Columbia Township. He preached his first sermon in the school house of District 132 on October 6, 1895. Eventually this led to the founding of Golgotha Lutheran Church.
On February 16, 1896, a cold and stormy day, after the regular bi-weekly service, a special meeting was held for the purpose of organizing a congregation. The minutes concerning this meeting read:
Wausa, Nebraska, February 16, 1896
On the date named above a number of German Lutheran families assembled for worship. After the regular service a business meeting was opened with prayer. A model constitution was presented to the members present, which was adopted and signed by nine of them. By signing it they became voting members. It was resolved thereafter that the name of this newly organized congregation was to be: German Evangelical Lutheran Golgatha Lutheran Church of Columbia Township, Knox County, Nebraska.
Jacob Peters was elected as chairman, Christ Repenning as secretary, William Krohn, Sr., Christ Repenning and Jacob Peters were elected Deacons. Frank Krugmann was chosen Treasurer. It was resolved that Sunday collections were to be gathered by way of "Klingebeutel" (a little black bag on a long handle with a tiny little bell on the pointed bottom of the bag, Old Country Style). Adjournment took place by repeating the Lord's Prayer.
Signed: Christ Repenning 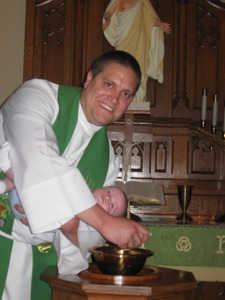 Pastor Adam Carl Salinas I am serving God's people in Word and Sacrament ministry at Golgotha Lutheran Church LCMS in Wausa, Nebraska. I have been serving as a pastor at Golgotha since October 10, 2010. I graduated from Concordia University Wisconsin on May 13, 2006. I graduated from Concordia Theological Seminary in Fort Wayne on May 21, 2010. I ran cross country and track for the CUW Falcons. I also played intramural basketball while I was attending college. I am an awesome guy to hang out with and I love talking with my friends. I am one of those guys that will be there for my friends no matter what happens to them in life. I love my family very much and I thank my wife, mother and brother for all their love and care that they have shown me. Basic Info Birthday: November 3, 1983 Sex: Male Relationship Status: Married to BethAnn E. Salinas Anniversary: November 21, 2009 Languages: American English Religious Views: Lutheran Church- Missouri Synod Political Views: Conservative Golgotha Lutheran Church LCMS Wausa, Nebraska Pastor · Oct 2010 to present · Wausa, Nebraska I am serving God's people in Word and Sacrament ministry. Graduate School: Concordia Theological Seminary Class of 2010 · Pastoral Ministry of the Lutheran Church Missouri Synod (LCMS) · Fort Wayne, Indiana College: Concordia University Wisconsin Class of 2006 · Theological Languages · Pastoral Ministry · Mequon, Wisconsin High School: Highland High School Class of 2002 · Highland, Indiana This is a beautiful description of God’s grace given to sinners according to the Gospel of St. John which is found in the Bible. God gives us his grace through the death of His Son Jesus Christ as He lays down His life for our sins. Jesus Christ loved us so much that He obediently died on the cross to forgive our sins so that we may enter into eternal life with Him in heaven forever. John 10:1-18 (English Standard Version) I Am the Good Shepherd 1"Truly, truly, I say to you, he who does not enter the sheepfold by the door but climbs in by another way, that man is a thief and a robber. 2But he who enters by the door is the shepherd of the sheep. 3To him the gatekeeper opens. The sheep hear his voice, and he calls his own sheep by name and leads them out. 4When he has brought out all his own, he goes before them, and the sheep follow him, for they know his voice. 5A stranger they will not follow, but they will flee from him, for they do not know the voice of strangers." 6This figure of speech Jesus used with them, but they did not understand what he was saying to them. 7So Jesus again said to them, "Truly, truly, I say to you, I am the door of the sheep. 8All who came before me are thieves and robbers, but the sheep did not listen to them. 9I am the door. If anyone enters by me, he will be saved and will go in and out and find pasture. 10The thief comes only to steal and kill and destroy. I came that they may have life and have it abundantly. 11I am the good shepherd. The good shepherd lays down his life for the sheep. 12He who is a hired hand and not a shepherd, who does not own the sheep, sees the wolf coming and leaves the sheep and flees, and the wolf snatches them and scatters them. 13He flees because he is a hired hand and cares nothing for the sheep. 14I am the good shepherd. I know my own and my own know me, 15just as the Father knows me and I know the Father; and I lay down my life for the sheep. 16And I have other sheep that are not of this fold. I must bring them also, and they will listen to my voice. So there will be one flock, one shepherd. 17For this reason the Father loves me, because I lay down my life that I may take it up again. 18No one takes it from me, but I lay it down of my own accord. I have authority to lay it down, and I have authority to take it up again. This charge I have received from my Father." This is the Word of the Lord. Thanks be to God.