A church for peole who have given up on the church! No perfect people! Eagle, ID 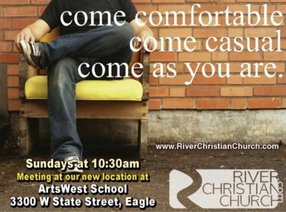 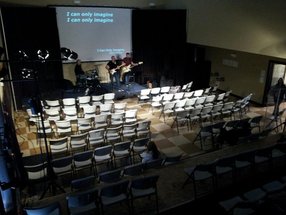 At the River Church, we teach the Bible in a practical way and how to apply it to everyday life. We celebrate what it means to be a Christ follower as we strive to live out a lifestyle of transformation. We work to deepen our relationships with others so that together we will grow and become spiritually mature. We desire to make an impact in our homes, communities, the nation and world - all for the glory of God!

If you want to be a part of a dynamic church family that is loving and caring; a church that will encourage and allow you to discover God at your own pace, a church committed to help you develop a life of transformation for Christ, a church that encourages developing relationships; then the River Church is the place for you! At the River Church we have a dream to truly make a difference in your life.

Dave was born and raised in Southern California. Having lived and served in ministry all over the United States; he has a varied background in both experience and diverse cultures. Dave holds a Bachelor’s Degree in Religion from California Lutheran University and a Master’s Degree in Ministry from Moody Bible Institute, Graduate School. Dave, and his wife Cathy, have been married for 35 years and have raised three grown daughters. Dave attended college on a football scholarship, a four-year varsity letterman. While in college, he established a Fellowship of Christian Athlete’s program and served as the first president of that organization at CLU. He played in the 1977 N.A.I.A. National Championship football game. After graduation, Dave considered an opportunity to walk on with the Dallas Cowboys as an offensive lineman; however, he felt God’s call to ministry and chose to follow God into full time ministry never regretting his decision. With a passion for youth, he served as a youth pastor for nineteen years. Continuing on with that love for students, he substitute taught on the high school level in public schools on his days off and coached girls’ fast pitch softball and high school track and field for eleven years. Dave and his wife Cathy have been in ministry together for 36 years, beginning during their engagement. They have served in churches in California, Arizona, Georgia, Indiana, Wisconsin, and Nevada; they currently serve in Eagle, Idaho. Dave loved serving as a youth pastor, ministering to students, until he received the call to become a senior pastor in Wisconsin where he took a five year old church of 175 to 300 in less than a year in a small town of 6000 people. Following that ministry, they felt the call to become church planters and moved their family to Las Vegas where they founded Desert Horizons Church and served there for twelve years. In spring of 2008, they felt the call to plant another church in Eagle, Idaho with a passion to reach the large number of non-churched, and given-up-on- church people in this suburb of Boise. As an accomplished speaker to both adults and youth, Dave has spoken at churches, camps, retreats, D-1 college football team chapels, public & private schools, training seminars, and in local correctional institutions. Having a very strong passion to reach out and share the good news of Jesus, Dave’s mission is to reach non-churched people and lead them into a life-changing, meaningful relationship with Jesus.