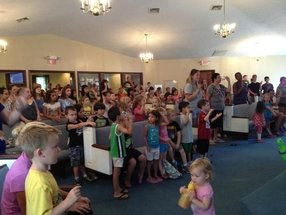 If you're looking for a place to connect, Community Gospel Church is filled with people from various cultures and every walk of life. If you'd like to connect, grow and serve...there's a place for you and your family!

What are services like?
We have a casual, relaxed feel yet vibrant worship. We emphasize a Bible-based preaching approach coupled with practical ideas and ways to live out our faith in our current life setting. Our service begins with family worship and then our children come forward for a little connection time with the Pastor. He then releases them to Kid's Connection--age appropriate, interactive Bible learning experience for our kids!

What is the community like?
We're a down to earth congregation with a hint of tradition mixed with a contemporary feel. Truly, this is best experienced personally. The father from one of our newer families called his sister on the phone following his first service with us and described it this way, "It was like I was with a big group of friends, I just hadn't met yet!"

What if I'm not a Christian?
We welcome each person regardless of where they may be in their faith journey. In our church, we are less concerned with "labels" and more concerned about relationship. We have many who are committed followers of Jesus Christ, still some who are new believers, and even some that are just learning about what it means to follow Jesus.

Pastor Joel and Gail have served in full-time ministry for over 10 years. Both are graduates of Central Bible College in Springfield, Missouri, where they met. They have been married for 12 years (August 9th). Following graduation, Joel and Gail served as Associate Pastors with emphasis in Youth and Music. They went on to serve for three years as Lead Pastors in Bethalto, Illinois, a bedroom community of St. Louis, Missouri, where they led the church through a dynamic revitalization and church merger. God blessed and miraculously strengthened the church to become one of the most vibrant churches in the Metro-East St. Louis region. God then led them to step out in faith and travel full-time on the evangelistic field. God birthed a dream in Joel's heart for Whole In One Ministries, an evangelistic ministry that presents the Gospel through music and drama. In June of 2007, while on tour, Joel and Gail were invited to pray about coming to serve in Northvale. Knowing that God was stirring their hearts, they continued to seek God for His wisdom and guidance. God confirmed His plan on July 15, 2007, and the VanBriggles accepted an invitation to serve as Lead Pastors at Community Gospel Church. It is exciting to see what God has in store!! Joel was born and raised in Washington, PA, just south of Pittsburgh…and yes, a die-hard Steelers fan!! He has been singing for over 22 years, and since age 16, he has sung in the 48 continental United States. Gail was born and raised in Bloomington, IL. Gail has been playing violin since age 4 and piano since age 5. She has served as concert master and in various roles for many orchestras including the Alton Symphony Orchestra (Metro-East, St. Louis region.) Her travels have taken her from England to Russia and many parts in between. She also served as a Missionary Associate in Brussels, Belgium for 6 months following an early high school graduation. Joel and Gail were both called into ministry at a young age, and have pursued that calling throughout their lives. They are both ordained with the Assemblies of God. They have two children. Anthony was born in August 2003. He has already been in 31 states and enjoys school, legos, soccer and baseball. Their daughter Emily was born in May 2006, and she is known for dragging her parents from table to table at every restaurant greeting each person with a hearty "Hi!"