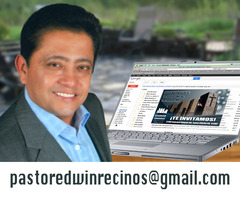 Pastor Edwin Recinos was born in 1963. At the age of 23 he married his sweetheart Meri Sanabria and soon they were blessed with the arrival of his son Elias, born on September 2, of 1988 and then a cute daughter, Irene, born February 1, 1990 As a young man Edwin went to business school and worked for years as a professional in management. Then in August of 1994 he started a new church with a group of about 20 people in Santa Clarita, California. In those years he was Purchasing Manager for the Los Angeles Radisson Hotel, one of the city’s largest hotels. It was an excellent job. For eight months, he continued in that job while also serving as pastor of the new church. Eventually the church grew to the point of needing a full time minister, so after ten years in the hotel business, Edwin left and embraced the pastorate for life. In 1997 pastor Edwin started a close discipleship program to train cell group leaders and launched cell groups for the work of evangelism and disciple making. By 2008 the monthly attendance to cell groups and main worship service surpassed 1,100 people. There are almost two hundred trained leaders and a total of 107 cell groups focused on evangelism and discipleship. Edwin was first licensed Minister by the United Brethren in Christ in July of 1993 and then Ordained Elder Minister by the United Brethren in Christ in March of 2000, and Ordained Elder Minister by the Missionary Church of America in March of 2007. While working full time and raising a family, Edwin had his Pastoral Theological training at: Assemblies of God Theological School, Huntington Park, California-1990 Theological Faculty Foursquare Institute, Montebello, California, -1993 Azusa Pacific University Extension, Pastoral Ministry, Oxnard, California -1997 Theological Faculty Foursquare Institute, Montebello, California -1998 International Center for Ministerial Studies –2007 Now, after almost twenty years of ministry the dream of building a new sanctuary became a reality for pastor Edwin and then, time to start a new movement that will communicate the good news of Jesus Christ in the great city of Santa Clarita both in English and Spanish. CITY ON A HILL represents the future
EDWIN RECINOS on Facebook
Services Directions Call Website
Suggest an Edit