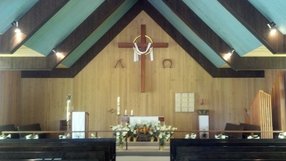 Welcome to All Saints Lutheran Church!

This is a congregation of the Evangelical Lutheran Church in America upholding the catholicity of the Evangelical Lutheran confessing movement within the one holy catholic and apostolic church [or upholding the heritage of the one holy catholic and apostolic church as received by the Evangelical Lutheran confessing movement]. We are both catholic and evangelical, two words often misunderstood. Evangelical means that we are centered in the gospel of Jesus Christ which announces grace and hope. Catholic means that we are part of the universal church of all times and places, and we claim the history and rich traditions of the church through the ages. The main act of worship for Lutherans and other catholic Christians is called the Eucharist, a biblical term meaning simply thanksgiving [I Timothy 2:1]. Since the early days of the church, this word has referred to the sacred meal Jesus gave his friends as a means of his continuing presence among them. The building itself contributes to our worship. The central focus of the building is the altar and the large cross with its golden nimbus, because the center of our service is Christ's sacrifice on the cross made present in the Eucharist and the vindication of his life shown in his rising from the dead, again made present in the Eucharist. In the Eucharist we receive the body and blood of Christ to strengthen us to be the body of Christ in the world, announcing God's promise to raise us and the whole creation to new life. 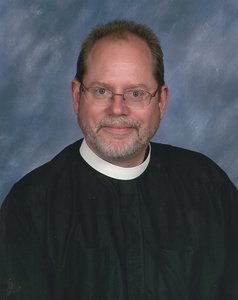 Paul Bieber was born on August 17, 1955, in Wichita, Kansas. Raised in Aurora, Colorado, he graduated from the University of Northern Colorado (BA, History) in 1977 and the University of Colorado (JD) in 1981. He was called to the Bar also in 1981 and engaged in the private practice of law for five years as an associate and then partner in the Denver, Colorado, law firm Robinson & Robinson, P.C. In 1986 he married Sarah Madelyn Swanson and began theological studies. He graduated from the Lutheran School of Theology at Chicago (MDiv) in 1990 and was ordained to the Holy Ministry that same year. He served at Lord of Life Lutheran Church in Waukegan, Illinois, and served as Pastor of Christ the Mediator Lutheran Church on the near South side of Chicago, Illinois, from 1993 to 2006. He received his Doctor of Ministry degree in preaching, also from the Lutheran School of Theology at Chicago, in 2001. Since August, 2006, Paul has served as Pastor of All Saints’ Lutheran Church in the University City neighborhood of San Diego, California. Paul’s sermons and sermon preparation materials have been published in Lutheran Forum and Homily Service. He served on the Editorial Board of Currents in Theology and Mission, the journal of LSTC, and on the Editorial Council of Let’s Talk, the theological journal of the Metropolitan Chicago Synod, Evangelical Lutheran Church in America. He is a member of Phi Alpha Theta, an International Honor Society in History. Since 1998, Paul has been a member of the Society of the Holy Trinity (STS, from Societas Trinitatis Sanctae), a Lutheran Ministerium, having served as Dean of the Society’s Northern Illinois Chapter. He has been active in the protection of research subjects, the prevention of elder abuse, and spiritual care of the elderly. Sarah is a medical Social Worker. Paul and Sarah have two sons: Jacob, an Eagle Scout and Junior at Valparaiso University (mathematics), and Stephen, an Eagle Scout and Junior at Scripps Ranch High School.